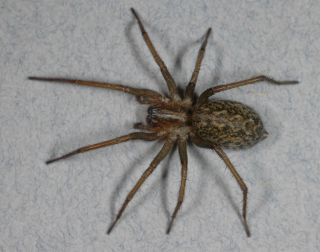 Whether the bites of the hobo spider are toxic to people has been a matter of scientific debate, but a new study suggests the spider's venom may be less harmful than many people think.

With black widows and brown recluse spiders, hobo spiders are listed by the Centers for Disease Control and Prevention as one of the three venomous spiders that can be found in the United States, that can be dangerous. In some cases, hobo spider bites have caused necrosis, which is the death of cells or tissue, according to a 1996 report from the CDC.

However, researchers have questioned for years whether there is actually sufficient evidence that hobo spider venom can indeed cause necrotic skin lesions, and how dangerous to humans these spiders really are. Moreover, hobo spiders are considered innocuous in Europe, and previous research comparing the venom of American and European members of the species did not find significant differences between the two. [Creepy, Crawly & Incredible: Photos of Spiders]

"There is a psychological thing about spiders, that people just want to believe that spiders are doing the damage," said study author Richard Vetter, an arachnologist at the University of California, Riverside. People may readily conclude that a spider caused an injury they actually incurred from something else, he said.

Hobo spiders are moderately large, measuring about a quarter-inch to a half-inch (7 to 14 millimeters) in body length, with a 1- to 2-inch (27 to 45 mm) leg span. The brown and grey spiders are native to Europe, and were probably introduced into the Seattle area in the 1920s or early 1930s. They have since spread through the Pacific northwest. The spiders build funnel-shaped webs in dark, moist areas, and are fast runners — moving up to 3 feet (1 meter) per second.

In the new study, Vetter and his colleagues examined 33 reported, verified spider bites that occurred in Oregon over three years. Different spider species perpetrated the bites, with one coming from a hobo spider.

The researchers examined the symptoms of the spider bite victims. Unlike some previous studies on spider bites, the researchers looked only at reports in which people actually caught the spiders that bit them, and submitted the eight-legged beasts as evidence.

It turned out that none of the spider bites in the sample, including the one inflicted by the hobo spider, resulted in dermonecrosis — the death of skin cells. The victim of the hobo spider suffered only pain, redness and twitching.

"Spiders are a very handy scapegoat to blame all the time" because, historically, people have had a negative view of spiders, Vetter told Live Science.

At the outset of the study, the researchers had wanted to look at a series of cases of hobo spider bites. But over the three-year period, the researchers found only one such report. And while this may not necessarily mean that hobo spiders rarely bite people, there is not sufficient evidence to prove that they are "common biters," either, Vetter said.

Previous reports of hobo spider bites have cited largely circumstantial evidence, with people reporting bites without providing evidence they were actually bitten by a hobo spider, or any spider at all, the researchers said. People may blame other medical conditions, for instance, skin conditions, on spider bites.

"Spider bite diagnoses are very handy diagnoses for a lot of doctors," Vetter said. "They can't be proven wrong, and 90 percent of everything heals by itself anyway."

Other researchers agreed with the idea that hobo spiders are not dangerous.

"I actually believe that it's not at all a real thing that the hobo spiders" have bites that can kill human skin tissue, said Christopher Buddle, an arachnologist at McGill University, who was not involved in the study. "I think it has largely been almost a hoax," he told Live Science.

The new study, which gathered data on the bites of a range of species of spiders, was quite valuable, because researchers don't know much about the potential medical importance of a lot of these species, Buddle said.

The fact that the researchers found just one case of a hobo spider bite, and no evidence of skin necrosis is interesting in itself, Buddle said. That result "suggests that maybe the fear around the hobo spider has really been overblown," he said.

The few previous reports of hobo spider bites also failed to show evidence of skin necrosis, Buddle said. "There is a lot of fear around spiders that gets proliferated online and in the media that's just not warranted," he said.