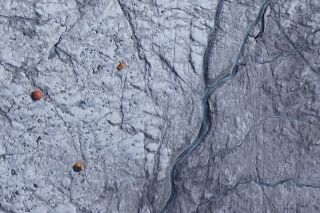 "Dark ice" on the right side of the photo is rich with impurities like soot and dust.
(Image: © NASA Earth Observatory)

Ribbons of "dark ice" are exposed on the otherwise white, frozen landscape of Greenland every summer, and researchers think these bands could reveal how climate change will affect the huge island.

Climate scientists Johnny Ryan, from Aberystwyth University in the United Kingdom, and Jason Box, from the Geological Survey of Denmark and Greenland, camped out in tents for most of the summer in southwest Greenland to measure how well dark ice, which is rich with impurities, can reflect sunlight. Their work is part of the ongoing Dark Snow Project that scientists hope will reveal more about how climate change will influence the melting of Greenland's ice sheet.

A drone captured images of Ryan and Box's tents in August. A patch of dark ice is visible to the right of the campsite. And a close-up provides a look at the team's scientific equipment, such as spectrometers used to measure the reflectivity of the ice. NASA's Earth Observatory released the images on Oct. 28. [Photos: Under the Greenland Ice Sheet]

The Greenland Ice Sheet covers about 660,000 square miles (1.7 million square kilometers). That's about the size of the United States east of the Mississippi River. The giant ice layer covers most of Greenland year round. The only land that ever thaws out is a narrow strip near the coasts as some glaciers melt and dump out into the ocean. A few streams and melt ponds show up farther inland, along with patches of dark ice.

The clumps of dark ice in the photos are part of Greenland's permanent ice sheet — the one that doesn't melt even during the summer. When fresh snow piles up it can reflect about 86 percent of the sunlight that hits it. But the layer of dark ice that gets exposed during the summer can reflect as little as 30 percent of incoming sunlight. This means the dark ice absorbs more heat, warms up the surface much faster and accelerates melting.

Melting could be a serious problem. On average, Greenland's huge ice sheet is 1.4 miles (2.3 km) thick. It holds 8 percent of the world's fresh water and if all of it melted, sea levels would rise a whopping 24 feet (7.4 meters).

Ryan and Box discovered that the exposed dark ice appears so dark because it's full of impurities. The ice is mixed with dust, algae and soot from wildfires that blazed thousands of years ago.

"So what happened in the past is having a direct effect on how the ice sheet behaves today," Ryan said in a statement.

Understanding the reflectivity of ice will provide insight into how quickly climate change will affect Greenland's ice sheet melts. Most scientists estimate major melting won't happen for several hundred years, but little is known about how the melting will happen and how quickly it will happen.

"There's still a great deal we don't understand about the materials that darken the underlying ice sheet and how their presence will affect how the ice sheet behaves," Box said in a statement. "We don't, for instance, have good measurements of the relative abundance of dust, algae, and black carbon (soot) that we find in the areas with dark snow."