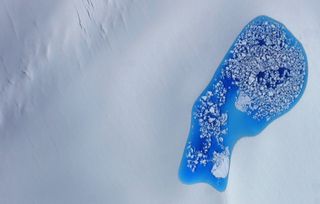 A NASA aircraft captured the sparkling turquoise melt ponds that appear in the Arctic every summer.
(Image: © NASA Earth Observatory)

Every summer, piles of snow on top of ice sheets in the Arctic begin to melt, creating brilliant aqua-colored pools that dot the otherwise snow-white landscape. A NASA aircraft recently flew over the region, capturing eye-catching images of these glittering pools.

The Arctic pools are called "melt ponds," and NASA's ER-2 aircraft captured an image of one of these ponds atop a glacier in southeast Alaska on July 16. ER-2 was flying at an altitude of about 64,000 feet (20,000 meters) when it snapped the photo, according to NASA officials.

It's estimated that the Arctic is losing about 30,000 square miles (78,000 square kilometers) of sea ice every year, and scientists are hoping to learn more about how melt ponds may be influencing the melting of Arctic ice sheets. [Images of Melt: Earth's Vanishing Ice]

Water absorbs more heat from the sun than ice and snow, so when pools of water that form on top of the ice sheets start heating up, it can accelerate the melting of the surrounding ice. Scientists think the number and size of melt ponds in the Arctic could indicate how much ice coverage will remain at the end of summer.

NASA's ER-2 aircraft is equipped with an instrument called the Multiple Altimeter Beam Experimental Lidar (MABEL) that can measure the elevation of glaciers and mountains in the Arctic. MABEL measures elevation using a technique called photon counting. This involves recording how long it takes individual photons (light particles) from a laser to travel from the aircraft to the ground, reflect off Earth's surface and travel back to the aircraft.

ER-2 also carries a digital camera system that can snap pictures every three seconds of areas that span about 1.6 miles by 0.9 miles (2.5 kilometers by 1.5 kilometers). NASA's Earth Observatory released the new images on Aug. 2.

ER-2 launched in Alaska and flew up to the North Pole, capturing photos and measuring the height of glaciers, mountains and forests before returning to California. Scientists plan to combine the images and measurements to develop an algorithm that will generate more precise measurements of ice sheet thickness and reveal how data collected from a melt pond is different from data collected over open water.

The algorithm and the MABEL system will be used on a mission called ICESat-2, which is scheduled to launch in 2017. ICESat-2 is a follow-up to the original ICESat mission that measured changes in elevation of ice sheets in the Arctic. Scientists hope the data collected will yield some insight into long-term variations of sea ice thickness.