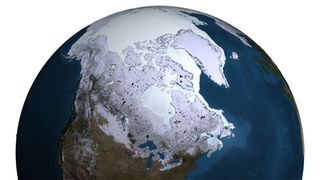 Every year the sea ice in the Arctic reaches its maximum extent in the Northern hemispheric winter, usually in mid-to-late March. This image shows the maximum for 2007.
(Image: © NASA)

The summer melt season for Arctic sea ice has lengthened by a month or more since 1979, a new study finds.

The primary culprit is a delayed fall freeze-up — the autumn chill when sea water freezes into ice — but the fallout remains the same: the Arctic ice cap is stuck in a vicious feedback loop betwixt its warming environment and melting ice, researchers reported Feb. 4 in the journal Geophysical Research Letters.

The Arctic is one of the fastest warming places on Earth. Temperatures here are rising twice as fast as the global average. As the atmosphere warms, the Arctic ice cap has shrunk by 12 percent per decade since 1978, when scientists started tracking ice with satellites, according to NASA. The seven lowest September ice extents (a measure of the total ice cover) have been in past 10 years, including 2013.

As the ice cover gets smaller, the amount of heat absorbed by the Arctic Ocean rises. Bright, white ice reflects most of the sun's energy, but the darker ocean water soaks it up. [Top 10 Surprising Results of Global Warming]

"The ocean has gained so much heat it takes a while to release it," said lead study author Julienne Stroeve, a senior scientist at the National Snow and Ice Data Center in Boulder, Colo. "That's delaying the autumn freeze-up."

In the past decade, the additional heat stored in the upper ocean has increased Arctic sea surface temperatures by 0.9 degrees to 2.7 degrees Fahrenheit (0.5 to 1.5 degrees Celsius), Stroeve and her colleagues report. These warmer ocean temperatures prolong the summer melt season because the ocean must fall below about 29 F (minus 1.9 C) before new sea ice forms.

In the Kara, Laptev, East Siberian, Chukchi and Beaufort seas, the fall freeze now comes between six and 11 days later each decade since 1979. The researchers found a similar trend in the East Greenland and Barents seas, where the fall freeze may now be delayed by as much as 40 days per decade.

Oil and gas companies are already exploiting this delay by pushing for drilling leases that allow extraction and exploration well into autumn, Stroeve said. But year-to-year ice conditions can still vary dramatically.

Stroeve notes that while the overall trend is for less sea ice and a longer summer melt season, within the Arctic, ocean and weather conditions can influence how much ice is present. For instance, ice cover in the Bering Sea has increased by 20 percent in recent years, the study finds. Winds pushing sea ice south into the Bering Sea may be the cause, though scientists are still debating the reasons for the added ice cover here.

Stroeve plans further work to investigate whether the spring warming is caused by an increase in atmospheric moisture, which means more clouds and solar radiation absorption, or whether warm air coming from the south plays a role. She also hopes to track ice thickness. In the 1980s, 70 percent of the Arctic ice cap was thick, multiyear ice, which survives the summer melting. By the end of 2012, less than 20 percent of the ice cap was multiyear ice — most of the ice cover was seasonal ice, only a year old. The thinner seasonal ice melts faster.