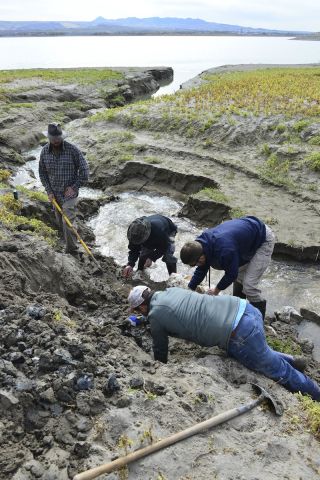 The skeleton of a mammoth was discovered this month on the banks of a reservoir in Idaho. Paleontologists have rescued part of its skull and a tusk, but there could be a lot more buried below the surface.

"We may even have a complete mammoth," said Mary Thompson, a vertebrate paleontologist and senior collections manager at the Idaho Museum of Natural History. "This is very unique for us."

Every year, when water levels drop in Idaho's American Falls Reservoir, teams of paleontologists and volunteers with the Bureau of Reclamation walk the beaches in search of fossils. The ancient bones of camels, bison latifrons, giant ground sloths, saber-toothed cats and other extinct Ice Age beasts sometimes poke out of the freshly eroded reservoir banks. [Photos : Ice Age Mammoth Unearthed in Idaho]

Earlier this month, one volunteer stumbled upon the mammoth fossil on a cliff face about 30 feet (9 meters) below the reservoir's high-water mark. Thompson said she could tell it was from a mammoth as soon as she got the pictures in her email inbox. She and a team of students and volunteers mounted a quick, two-and-a-half-day excavation to dig up the bones as they raced rising water levels.

"I've been here since 1990, and we haven't gotten anything this complete from that site since then," Thompson told Live Science. "Out of this area, we have one other complete mammoth."

The excavators used plaster casts to remove most of the mammoth's right tusk, which was about 7.5 inches (19 centimeters) in diameter. They also found part of its skull, a chunk of its mandible and two jagged upper molars. The specimen was transferred to the Idaho Museum of Natural History at Idaho State University in Pocatello.

From the rings in the tusk, the researchers estimated that the mammoth was 16 years old — a fully grown adult — when it died. Based on the age of the surrounding sediments, Thompson thinks the mammoth must have been buried on its right side more than 72,000 years ago.

The unexcavated parts of the mammoth were covered up with geotextile and soil after the short dig. Thompson said she hopes to bring a team back next year with ground-penetrating radar tools to get a better idea of what actually lies below the surface. If they are dealing with a full mammoth skeleton or even a partial skeleton, the team might need to figure out a way to get a backhoe down the steep reservoir bank to help with the excavation. This month, they did all the heavy lifting and digging by hand and with shovels.