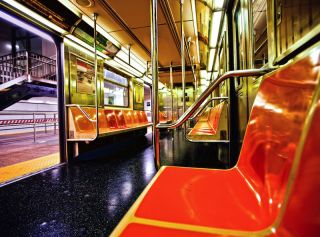 News that a doctor in New York with Ebola traveled on the subway the day before he developed symptoms of the disease may have some people worried about contracting Ebola on public transportation.

Yesterday, Dr. Craig Spencer, who recently returned from treating Ebola patients in Guinea, developed a fever and tested positive for Ebola. He is now being treated in an isolation unit at Bellevue Hospital in New York City.

The day before Spencer developed symptoms, he rode the city subway's A, 1 and L lines, and went bowling at an alley in Brooklyn, Dr. Mary Travis Bassett, the New York City public health commissioner, said at a news conference on Thursday evening. [2014 Ebola Outbreak: Full Coverage of the Viral Epidemic]

Here's what you need to know about Ebola and public transportation:

Should people be worried about getting Ebola on the subway?

People who rode in the same subway car either with Spencer, or after he left it, have "very minimal to zero risk" of catching Ebola, said Dr. Amesh Adalja, a representative for the Infectious Diseases Society of America.

That's because Spencer wasn't experiencing symptoms when he rode the subway, and the virus can only be spread once someone is symptomatic, Adalja said.

Also, Ebola is spread through direct contact with the infected person, or their blood or bodily fluids, and Spencer did not vomit or bleed on the subway.

"Unless he was discharging blood and body fluids on the subway," there's no way that anyone in the car with him could have gotten Ebola, Adalja said.

But what if a person with Ebola coughs or sneezes onto a subway pole or other surface? Should people be worried about touching those surfaces?

The risk that Spencer would have spread the virus this way is low, Adalja said. Because Spencer did not yet have Ebola symptoms, he would not be expected to have the virus in his bodily fluids, Adalja said.

A person sick with a fever from Ebola is unlikely to feel well enough go out and interact with others, Derek Gatherer, a researcher at Lancaster University in the United Kingdom who studies virus genetics, told Live Science in a June interview.

In addition, the virus cannot live very long outside of a human or other animal, Adalja said. On dry surfaces, the virus can survive for several hours, according to the Centers for Disease Control and Prevention.

Why can't people who have Ebola spread the disease before their symptoms show?

Before symptoms develop, the virus is concentrated in internal organs, such as the spleen, and it is not widespread in the body, Adalja said. By the time the virus has spread to bodily fluids, the person has developed symptoms, he said.