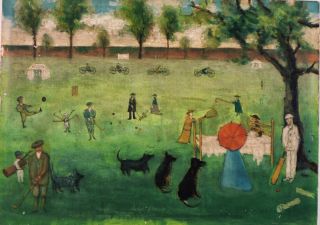 This small oil painting was created sometime between 1890 and 1900 by George Isaac Sidebottom, a patient at the York Retreat in England.
(Image: © Courtesy of the Wellcome Library)

The paintings, poetry and accounts of cricket matches from British psychiatric patients are among some 800,000 historic documents about to go online as part of a project to digitize mental health records from the 18th, 19th and 20th centuries.

The Wellcome Library has been digitizing thousands of documents related to the United Kingdom's medical history. The organization announced last week that it is partnering with several archives to make a searchable database of texts and images from the York Retreat, St. Luke's Hospital Woodside, Crichton Royal Hospital, Gartnavel Royal Hospital and Camberwell House Asylum.

"This partnership will bring some rare and important historical material from a fascinating period of medical history into an open and free online resource," Simon Chaplin, head of the Wellcome Library, said in a statement. "Broadening access to such collections is at the heart of the Wellcome Library's digitization project, and we are delighted that others are joining with us to make this possible." [7 Absolutely Evil Medical Experiments]

The trove will focus on records dating from the 19th century and the 20th centuries, tracking the movement away from institutional care, according to the Wellcome Library.

As part of the effort, the Borthwick Institute for Archives will contribute documents on the controversies at York Asylum (now Bootham Park Hospital). The abuse and neglect of patients at that institution sparked a national public debate and a campaign of mental health reform from 1813-1815. Even earlier, in the late 18th century, the death of a Quaker woman named Hannah Mills, who was confined at the asylum, prompted the establishment of the York Retreat in 1796. Quaker William Tuke, who had visited the York Asylum and was appalled by the squalid conditions, founded the Retreat, considered a birthplace of "moral treatment" for the mentally ill.

As part of the Wellcom project, the Borthwick Institute will digitize archives from the Retreat (which is still open today), including a painting by a man named George Sidebottom, a resident at the center from 1894 until 1912. Sidebottom "suffered from moral and religious delusions," and occupied himself with painting, reading, walking and playing the piano, according to the Borthwick Institute.

Some items that are already online in the Wellcome Library's collection provide a glimpse at what one might find in the archives of psychiatric institutions — such as a drawing tucked into a case book from the Ticehurst house, a private hospital, in the late 19th century.

The collection will also contain copies of publications written and edited by hospital patients, including "The New Moon," made at the Crichton Royal Hospital. And there are visitors' books with signatures from VIPs. Author Charles Dickens signed the guest book at St Luke's Hospital Woodside on Jan. 15, 1858 and noted "the great improvements in the hospital…[and the] wise spirit of the whole administration."