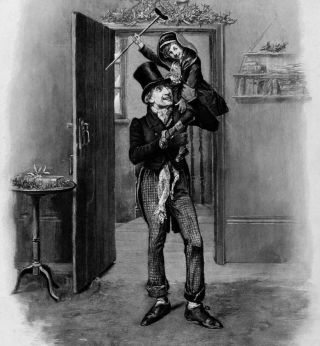 Plucky, ailing Tiny Tim is one of the most enduring characters to come out of Charles Dickens' 1843 novella "A Christmas Carol." But Dickens never explains why Tiny Tim wears leg braces and uses a crutch, nor does he make clear what will kill the young boy if the miserly Ebenezer Scrooge doesn't change his ways.

Now, a medical doctor thinks he has the answer. According to Russell Chesney, a physician at Le Bonheur Children's Hospital at the University of Tennessee Health Science Center in Memphis, Tiny Tim suffered from a combination of rickets and tuberculosis.

Chesney made his diagnosis based on Tim's deformities described in the text, along with the story's insinuation that the boy's disease would be curable if his father had more money. Rickets is a bone disorder caused by a deficiency in vitamin D, calcium or phosphate. Lack of these crucial nutrients softens the bones, and leg braces would have been the 1840s solution, Chesney said. Since vitamin D-fortified milk and infant formula was introduced decades ago, this disorder is rarely seen in the United States.

Not only that, but vitamin D deficiency can contribute to tuberculosis by weakening the immune system, allowing the bacterial infection that causes the disease to run rampant. Tuberculosis, once known as the "white plague," was a killer in Dickens' time, Chesney said. Currently about one-third of the world population is infected with TB, with cases in the Americas accounting for just under 3 percent of this total, according to the World Health Organization.

"People who have nutritional deficiency also may have diseases in which nutrition plays a role, and tuberculosis is one of them," he told LiveScience. [Top 10 Nutrition Apps]

Tiny Tim's life in cramped, polluted London would have set him up for both rickets and tuberculosis, Chesney said. At the time, 60 percent of children of working-class London families had rickets, brought on by poor nutrition and lack of sunlight. (London's coal-choked skies blocked the sun's ultraviolet light that helps the body synthesize vitamin D.)

At the same time, half of working-class kids had signs of tuberculosis, Chesney reported Monday (March 5) in the journal Archives of Pediatrics & Adolescent Medicine. Tiny Tim's rickets could have been reversed — and his tuberculosis improved — by sunshine, a better diet and cod liver oil, a supplement rich in vitamin D, Chesney said.

Chesney isn't the first to suggest a medical diagnosis for Tiny Tim. Others have suggested that he had polio, cerebral palsy or a kidney disease called renal tubular acidosis.

Dickens isn't telling, of course, and "it's always hard to diagnose a character who is totally fictional," Chesney said. But he said that Dickens' descriptions of 1800s ailments are often very accurately rendered. Tiny Tim may have been based on two real people in Dickens' life: his nephew, Henry, who died of tuberculosis, and the son of a friend who was disabled.

"The greatest fun in all of this is getting to read Charles Dickens again," Chesney said.