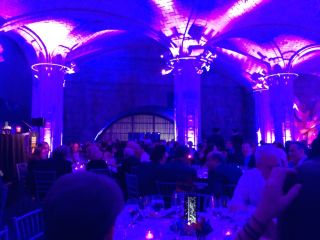 New York philanthropists got their geek on at the National Museum of Math's "Chaos Ball" Oct. 14.
(Image: © Tanya Lewis)

NEW YORK — It's not every day that a gala event is devoted to the celebration of math, but that's exactly what happened Tuesday night (Oct. 14), when actor Alan Alda and mathematician Steve Strogatz regaled a crowd of New York's business elite here at the National Museum of Mathematics' "Chaos Ball."

The event, a fundraiser for the museum (MoMath), featured a dinnertime discussion of chaos theory and hands-on math demonstrations at a swanky venue under the Ed Koch Queensboro Bridge on Manhattan's East Side.

The gala emphasized the importance of making math fun and exciting. [Take a photo tour of the Museum of Math]

"Somehow, it has become socially acceptable to say, 'I'm not good at math,'" said Saul Rosenthal, a museum trustee and president of the Greenwich, Connecticut-based investment company TICC Capital Corp. "That's not acceptable."

During the cocktail hour, guests mingled among math-themed exhibits. One featured pairs of rocking chairs on a sliding platform; whenever someone rocked one chair, it would cause the other to rock, too. Another exhibit featured a shape-shifting bench that could change from a cube into a triangle without disconnecting its pieces.

Space tourists Anousheh Ansari, the first woman to fly on a self-funded journey to space, and Richard Garriott de Cayeux (the son of former NASA astronaut Owen Garriott), who also paid for his own journey to the International Space Station in 2008, were among the distinguished guests at the ball.

Over a three-course meal, Alda, best known for his role as Hawkeye Pierce in the TV series "M*A*S*H," and Strogatz, an applied mathematics professor at Cornell University, talked about the mathematical meaning of chaos.

"People like me, who are on the outside of math, tend to think of chaos as what happens when everything is totally unpredictable and messed up," Alda said.

Although unpredictability is one of the hallmarks of chaos in math, the chaos doesn't stem from chance — it still comes from a system that has rules, Strogatz said. It is possible to make predictions at first, but as tiny changes start to build up, the system snowballs into something unpredictable, he said.

This phenomenon, in which a small change in a system can result in large differences later on, is popularly known as the "butterfly effect." It's usually presented as the idea that a butterfly flapping its wings in Brazil can cause a tornado in Texas.

"Even the most seemingly regular systems [are] afflicted by a kind of unpredictability," Strogatz said. For example, the motion of a double pendulum — a pendulum with another pendulum attached to its end — can quickly become chaotic.

More surprisingly, when two or more chaotic systems are coupled, they can become synchronized — a phenomenon Strogatz studies. He wrote a book on the subject called "Sync: The Emerging Science of Spontaneous Order" (Hyperion, 2003).

To demonstrate the effect, each table at the Chaos Ball had a centerpiece consisting of half a dozen metronomes, a flat panel and two cylindrical rods. The guests were instructed to balance the metronomes on the panel on top of the rods so that the contraption could roll freely. The metronomes were initially moving out of phase with each other, but they eventually fell in sync.

The night's entertainment was proof that making math a hands-on activity can inspire adults and children alike.