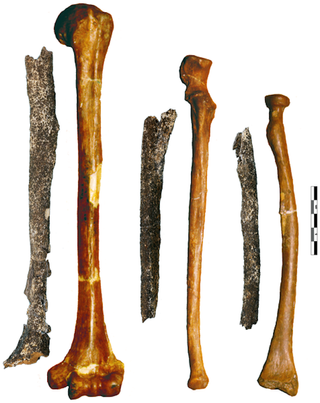 Three arm bones from a prehistoric individual, likely a Neanderthal, were uncovered in the Seine Valley of northern France, suggesting that Neanderthals had a temporary camp along the river 200,000 years ago.

The long left arm bones, dated at 200,000 years old, are the oldest human ancestor remains ever to be discovered in Tourville-la-Rivière, about 72 miles (116 kilometers) northwest of Paris. Fossils from this time period are rare, and may help fill in gaps about the evolution of humans and their close relatives, the researchers said.

"These are the oldest fossils found near Paris. It's the oldest Parisian, if you like," study researcher Bruno Maureille, at the Université de Bordeaux in Talence, France, told the BBC.

The bones, found in September 2010, consist of a humerus, radius and ulna from a left arm. Based on their size, the bones probably belonged to an adult or older adolescent, the researchers said. [The 10 Biggest Mysteries of the First Humans]

The left humerus shows a curious injury that may indicate signs of muscle damage near the shoulder, possibly from doing a repetitive action, such as throwing or hammering, said study researcher Erik Trinkaus, a professor of anthropology at Washington University in St. Louis.

Trinkaus and his colleagues examined the humerus in detail, finding that it measures 9.1 inches (23.2 centimeters) and has a bony crest 1.6 inches (4 cm) long. Computer tomography scans suggest the crest may be evidence of an injury to the deltoid muscle at the owner's shoulder.

The individual may have gotten the injury from throwing a spear while hunting, even though all of the spears anthropologists have found from that time period are large and heavy, Trinkaus said.

If the injury is indicative of overuse from throwing, the newly found humerus would provide evidence that early humans and their relatives may have thrown spears 200,000 years ago, he said.

That interpretation is "controversial" but plausible, said Brian Richmond, a curator of anthropology at the American Museum of Natural History in New York, who was not involved in the study. "It looks like the bone kind of grew out [from the arm], probably from some damage where the muscle was attached to it," Richmond told Live Science.

It's unclear what caused the injury, but "they're arguing that this may be due to repetitive use, possibly throwing," Richmond said.

The guess isn't a bad one, he said. Humans are unusually good at throwing, whereas other animals, such as chimpanzees and apes, can't throw as accurately or as fast people can. "We seem to have an anatomy that's well designed for that," Richmond said. "And that anatomy probably goes back to as far as the Neanderthals."

The Neanderthals are the closest extinct relatives of modern humans, and went extinct about 40,000 years ago. There's evidence that human ancestors and relatives were capable hunters 200,000 years ago, so it's plausible that the individual was injured from repetitively throwing something, such as a hunting weapon, Richmond said.

"It's a provocative idea that as far back as 200,000 years ago, we see [bone] stress that may have resulted from repetitive throwing," he said. "It raises interesting questions about just how these early humans hunted."

The study was published Oct. 8 in the journal PLOS ONE.