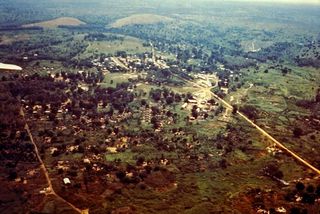 This aerial photograph shows the small village of Yambuku in Zaire, where in 1976, the first signs of the Ebola virus appeared in a patient treated at a mission hospital run by Flemish nuns.
(Image: © Dr. Joel G. Breman)

The Ebola virus that caused the devastating outbreak in West Africa between 2014 and 2016 didn't even have a name just 38 years ago, when it first surfaced and caused a mysterious illness among villagers in Zaire, now the Democratic Republic of Congo.

The international team of scientists who were tasked with investigating that 1976 Ebola outbreak  were shocked at the sight of the virus and the disease it caused, Dr. Peter Piot, co-discoverer of the virus, recalls in his memoir "No Time to Lose: A Life in Pursuit of Deadly Viruses." (W. W. Norton & Company, 2012)

When the scientists, inside their Belgian laboratory, looked under the microscope at blood samples sent from Africa, the virus looked like a worm or a long string, unlike almost any viruses known at the time. And once the team got on the ground in Zaire, they saw how rapidly the virus spread and how quickly it killed its victims. They knew they had to figure out how this mysterious new virus was being transmitted, what it did inside the body, and how it could be stopped.

But they also had to figure out a name for the new virus.

The story of how Ebola got its name is short and somewhat random, according to Piot's account. Late one night, the group of scientists discussed over Kentucky bourbon what the virus they were hunting should be named.

The virus had surfaced in a village called Yambuku, so it could be named after the village, argued one team member, Dr. Pierre Sureau, of the Institut Pasteur in France, Piot recalled.

But naming the virus Yambuku ran the risk of stigmatizing the village, said another scientist, Dr. Joel Breman, from the Centers for Disease Control and Prevention (CDC). This had happened before, for example, in the case of Lassa virus, which emerged in the town of Lassa in Nigeria in 1969.

It was Karl Johnson, another researcher from the CDC, and the leader of the research team, who suggested naming the virus after a river, to tone down the emphasis on a particular place.

One obvious option would have been the Congo River, which is the deepest river in the world and flows through the country and its rainforest. But there was a problem— another virus with a similar name already existed. That virus was the Crimean-Congo hemorrhagic fever virus.

So the scientists looked at a small map, pinned up on the wall, for any other rivers near Yambuku. On the map, it appeared that the closest river to Yambuku was called Ebola, meaning "Black River," in the local language Lingala.

However, the map was inaccurate, and the Ebola river turned out not to be the closest river to Yambuku, Piot said.

"But in our entirely fatigued state, that's what we ended up calling the virus: Ebola."

The tradition continues today. In 2013, after months of being called by a number of names, a newly discovered coronavirus finally got an official name — Middle East respiratory syndrome coronavirus, or MERS-CoV. And another coronavirus, first discovered at the end of 2019 and currently spreading across the globe, is now called SARS-CoV-2.