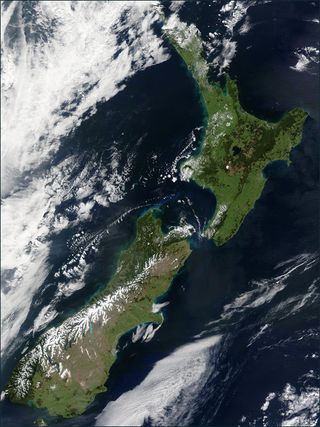 A deep-drilling project into one of the world's most dangerous earthquake faults is now underway on New Zealand's South Island.

Scientists from around the world have gathered at the drill site near Whataroa, north of Franz Josef glacier, for the rare opportunity to glimpse the inner workings of the Alpine Fault. The island-spanning fault unleashes a great earthquake every two to four centuries, with the average time between temblors about 330 years. The most recent earthquake, in 1717, was an estimated magnitude 8.1.

Through the drilling project, researchers hope to catch warning signs before the Alpine Fault unleashes its next earthquake. The odds of another magnitude-8 earthquake in the next 50 years are a relatively high 28 percent, say the project's scientists. ['Middle Earth': New Zealand's Fantasy Landscape (Photos)]

"We're a little overdue for a big earthquake there," said Ben van der Pluijm, a geologist at the University of Michigan in Ann Arbor, who is participating in the project.

This is the first time scientists have drilled deep into a ripening fault, before it unleashes a major earthquake. Previous projects have examined the aftermath of earthquakes, such as a rapid-fire drilling expedition following the 2011 Japan earthquake and related tsunami. And the only other deep earthquake borehole, a 2.1-mile-deep (3.4 km) puncture into California's San Andreas Fault, was set in a creeping section that has never unleashed large quakes in historic times.

But even if the next earthquake never strikes while the Alpine Fault sensors monitor the borehole, researchers will still consider the project a success. Rock samples collected during drilling, to be dispersed to 12 countries, will come from the depths at which earthquakes strike. The information will improve models of how earthquakes and faults work, researchers said.

"The drilling aims to go to where the earthquakes are," Van der Pluijm told Live Science. "This will tell us a lot about earthquakes and fault zones."

The Alpine Fault marks the boundary between the Australian and Pacific tectonic plates, where these two massive slabs of Earth's crust slide past each other. On New Zealand's South Island, during the next earthquake, land on either side of the Alpine Fault will probably jump about 26 feet (8 m) horizontally and 13 feet (4 m) vertically, if the fault behaves as in past earthquakes. Over millions of years, these upward shoves have lifted the spectacular Southern Alps mountain range.

The $2.5 million Deep Fault Drilling Project plans to sink a 4-inch-wide (10 centimeter) borehole 4,265 feet (1,300 meters) deep across the Alpine Fault. Researchers will measure temperature, pressure and geological properties below the surface. Sensors will also track the buildup of pressure between the two plates.

The team plans to punch through the fault itself, located about 3,280 feet (1,000 m) below the surface, and into the underlying Australian plate. Remote imaging of the fault suggests the fault angles downward at 45 degrees below the surface near Whataroa.

Two test boreholes were completed in 2011, reaching a shallow 495 feet (151 m). The earlier drilling revealed that smashed rock in the shallow fault zone, as finely ground as clay, prevents groundwater from flowing across the fault. Researchers plan to test whether slippery clays also line the fault's deeper reaches. Clay acts like grease on a fault, making it slip more easily.

"Similar projects overseas have shown that a huge amount of information can be extracted from samples retrieved from the heart of the fault zone," project co-leader Rupert Sutherland of GNS Science said in a statement.