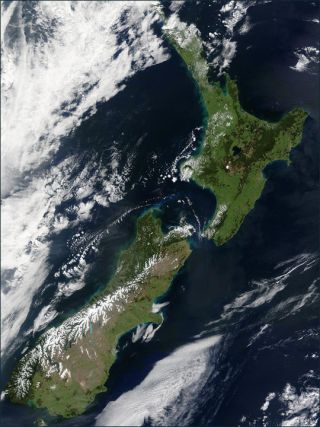 New Zealand has a 30 percent chance of being struck by a major earthquake in the next 50 years, researchers say after developing a new, millennia-long history of earthquakes in the region.

For more than a century, scientists have suspected that major earthquakes recur relatively regularly at major faults, such as where tectonic plates meet. However, long records of earthquakes along such faults are rare, making this idea hard to prove.

Now scientists have developed an 8,000-year history of major earthquakes at a site along the Alpine fault in New Zealand, that country's version of California's San Andreas fault.

"Really big earthquakes that occur quite infrequently can be tracked over many thousands of years by using high-resolution geological studies," said researcher Kelvin Berryman, a geologist at GNS Science in Lower Hutt, New Zealand. "The repeat time for these events, at least on some faults, is quite regular."

Investigators used carbon dating to determine the ages of leaves and seeds that were buried by silt each time a major quake struck a site along the west coast of the South Island. The layers of silt were deposited when Hokuri Creek was temporarily dammed by a surface rupture of the fault, which runs 530 miles (850 kilometers) along the length of the South Island.

The researchers found that 24 earthquakes occurred at nearly regular intervals over the past 8,000 years. The shortest interval between quakes was about 100 years, the longest interval was about 500 years, and the average was about 330 years.

The scientists estimate that recent events were between magnitudes of 7.6 to 8.3.

"To forecast where and when future major earthquakes will occur, we need a good statistical sample of the past record of these big events," Berryman told OurAmazingPlanet. "Records such as we have obtained from the Alpine fault are one such record."

The last major earthquake on the Alpine fault occurred 295 years ago, suggesting  southern New Zealand may well be due for another quake soon.

The South Island has far fewer inhabitants than New Zealand's North Island, but researchers say an earthquake there could have a direct impact on tens of thousands of people.

"There are about 1 million people in the whole of the South Island, mostly on the east coast, more than 100 kilometers [60 miles] from the fault," Berryman said. "The population of the area likely to be severely affected by the future Alpine fault earthquake is about 40,000 to 50,000, although there are major tourist destinations in the region as well."

"If not in our lifetimes, then [an earthquake is] increasingly likely in our children's or our grandchildren's — therefore a precautionary approach is certainly warranted," Berryman said. "The important things for authorities are to encourage personal and household preparedness, to address earthquake-prone building occupancy in the near field of the fault, and to encourage preparedness actions among emergency services and responding agencies."

Future research should hunt for other sites along the Alpine fault so that the results based primarily on a single site can be validated at others, the researchers noted.

"The challenge in this is finding appropriate sites where long records of past fault movements can be found and where sediments preserving the record can be dated," Berryman said. "The physical environment along the Alpine fault is very challenging, with annual rainfall of 5 to 8 meters [16 to 26 feet]; steep slopes along the mountain front with angles of 45 degrees that are prone to landsliding, which obscures the fault in many locations; fast-moving rivers carrying coarse gravel that are difficult to date; and thick rainforest."