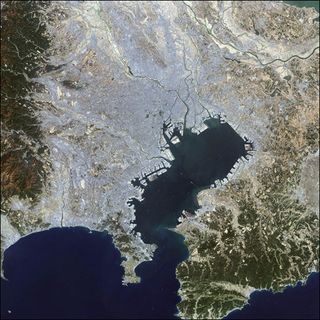 Japan's Kanto region, which includes the city of Tokyo on the main island of Honshu, is one of the most seismically active areas on Earth. Situated near the triple junction of the Pacific, Philippine and Eurasian plates, the Kanto region lies along the famed Pacific Ring of Fire and has experienced more than its fair share of earthquakes and tsunamis.

Historical records document dozens of quakes in the Kanto region over the last millennium, but it's been difficult for scientists and historians to figure out how often the largest of those quakes, dubbed the great Kanto earthquakes, recur.

Now, a team of Japanese scientists has combined those historical records with geochemical and depositional analyses of the region's soil to better pinpoint the Kanto region's major historical quakes.

"The interval of the great Kanto earthquakes has variation," said Haengyoong Kim, a geophysicist at the University of Tokyo who co-authored the study. "The recurrence interval is not at all even," he said, making it difficult for scientists to know when to expect the next major quake.

The most recent great Kanto earthquake struck Honshu in 1923. The magnitude-7.9 quake killed more than 105,000 people — nearly three of every 200 Tokyo residents at the time — lifted the Miura Peninsula more than 5 feet (1.5 meters), and triggered a tsunami that was at least 16 feet (5 m) high, which itself claimed another 300 lives. [10 Biggest Earthquakes in History]

About 200 years earlier, in 1703, a magnitude-8.2 Kanto quake caused 10,000 casualties. This quake also lifted the Miura Peninsula and caused a 16-foot (5-m) tsunami, according to historical reports.

But the region's written records become a little spotty before the 1703 quake, so Kim and his colleagues turned to geological evidence to figure out when earlier great Kanto earthquakes struck the region.

Kim's team examined sediment cores from tidal flats on the Miura Peninsula. In them they found three distinct bands of shells and gravel — evidence of three large tsunamis, they say.

"Such abrupt changes of sedimentary environment were caused by coseismic crustal movements," Kim and his team wrote in their study. In other words, the only way to explain the dramatic shell-gravel layers is through tsunamis triggered by major earthquakes.

The team then used radiometric dating to deduce the ages of the three layers. They found that the top band of gravel was deposited in the early- to mid-1900s, and the second was deposited after 1650, correlating well with records of the 1923 and 1703 earthquakes.

The third layer was deposited between the years 1060 and 1400, they found. To pinpoint the specific date, the team went back to the Kanto region's trove of written records. They were able to match the oldest tsunami layer to a major earthquake in 1293 that killed more than 23,000 people and severely damaged cities and temples.

Overall, Kim and his colleagues found that the time between Kanto's large temblors varies widely, from about 200 to 400 years.

Although the 200-year interval separating the two most recent quakes was much shorter than the 400-year interval between the first two, scientists can't predict that the next quake will come any sooner, Kim said.

"Our dataset does not indicate — and this study does not mean — that the time interval to the next future earthquake will be short," Kim told OurAmazingPlanet.

"The magnitudes and source areas vary in each of the past Kanto earthquakes," Kim said, meaning that the next quake may be just as complex — and just as difficult to predict — as the first three great Kanto earthquakes.

The team's findings were published Dec. 30 in the Journal of Geophysical Research-Solid Earth.