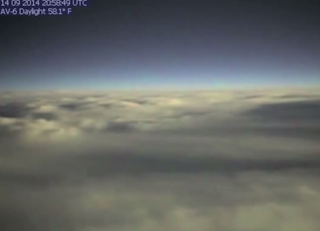 In September, when Hurricane Edouard was churning over the Atlantic Ocean, NASA dispatched its Global Hawk drones to fly directly over the eye of the storm.

Now, NASA has released video footage from one of the unmanned, data-collecting flights. From above the clouds, the view is surprisingly peaceful.

Edouard never posed any threat to land, which is a good thing since it was the strongest storm in the Atlantic since Hurricane Sandy ravaged the East Coast of the United States in 2012. [Hurricanes from Above: See Photos of Nature's Biggest Storms]

Edouard — the fifth named storm of the season — formed on Sept. 11 west of the Cape Verde Islands, near West Africa. The storm peaked as a Category 3 hurricane on Sept. 16, with winds reaching speeds of 115 mph (185 km/h), according to the National Hurricane Center (NHC).

A day later, one of NASA's round-nosed Global Hawk drones took off from the agency's Wallops Flight Facility, on the eastern shore of Virginia, to check out the storm. The aircraft dropped 88 packages of scientific instruments, known as a "sondes" or "dropsondes," into the hurricane to measure temperature, humidity and winds throughout the troposphere, the lowest layer of Earth's atmosphere.

One sonde was dropped right along the wall of the hurricane's eye, from an altitude of 62,000 feet (18,897 kilometers) — double the cruising altitude for most commercial jetliner flights. According to the sonde's observations, sea-level pressure had dropped to 963 millibars (typically, the average is 1013.25 millibars) and surface winds were ripping at 103.6 mph (166.7 km/h). The data indicated the storm was at least a strong Category 2 hurricane, and possibly a Category 3, according to NASA.

The same Global Hawk drone took flight again on Sept. 18, and deployed 50 sondes to capture data on the weakening storm.

The flights were part of NASA's Hurricane and Severe Storms Sentinel mission. Now in its third year, the program is designed to investigate how storms form and intensify in the Atlantic Ocean basin.