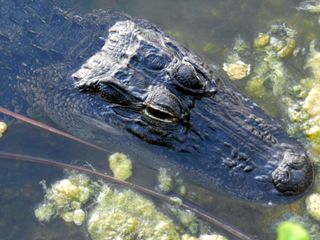 An amazing video from the Florida Keys shows a curious domestic cat nearly become a midnight snack for an American alligator.

The suspenseful, infrared footage of the attack evokes a classic black-and-white horror film. Shot from a camera trap in the National Key Deer Wildlife Refuge, it caught the cat dancing with fate, cautiously tiptoeing toward something mysterious out of the camera's frame. Suddenly, leaves rustle and a 6-foot-long (1.8 meters) alligator leaps at the fleeing feline.

The remotely operated camera belongs to Alyssa Johnson, an environmental education and outreach intern at the refuge. This summer, Johnson installed two of her own camera traps near popular visitor spots to document the local wildlife. (The U.S. Fish and Wildlife Service also maintains its own set of camera traps in the refuge for research, Johnson said.)

"I love the cameras, because we get to see what the animals are doing when we're not around," Johnson told Live Science.

The 'fraidy cat's bright eyes and bushy tail have confused online commenters, who insist the creature is a coyote or fox, not Fluffy or Mr. Meow. But Johnson points out that nighttime cameras often make animals appear ghostly or strange to humans, because our eyes aren't familiar with the details picked out by infrared light. Also, there are no foxes, coyotes, bobcats or panthers in the refuge, she said. [Video: Watch The Cat Evade The Alligator]

The footage was shot in the dark, at 3:24 a.m., which means the cat was probably relying more on its hearing and smell than its sight to sense the threat lurking ahead, Johnson explained. Another camera-trap video shot an hour later recorded a Key deer carefully avoiding a languid alligator. "It just walks up and does the same dance," she said. "It probably heard what happened to the cat."

Johnson said the alligators live nearby in what locals call the "Blue Hole," an old limestone quarry that is now a freshwater pond. The water also draws Key deer, iguanas and birds.

The National Key Deer Refuge is on Big Pine Key, a small island southwest of the Florida peninsula, linked to the mainland by the Overseas Highway (U.S. 1). Domestic cats roam the refuge, freed from the private homes that lie outside its boundaries. There is no fence to keep them out — not that fences ever stopped a determined cat.

"Where the video was taken is very close to a neighborhood," Johnson said. "It's very possible that this was someone's cat who was out for a midnight stroll and doesn't respect boundaries on maps."

In some areas of the world, pet cats now face heavy pressure from bird lovers, who see them as wanton predators responsible for killing endangered species. House cats kill a median of 2.4 billion birds and 12.3 billion mammals in the United States each year, most of them native North American species, according to a 2013 study from the Smithsonian Conservation Biology Institute and the Fish and Wildlife Service.

Key deer are too big for a cat to kill. But farther east, in Key Largo, the pampered pets are decimating two endangered species in the Crocodile Lake National Wildlife Refuge: the Key Largo wood rat and Key Largo cotton mouse.