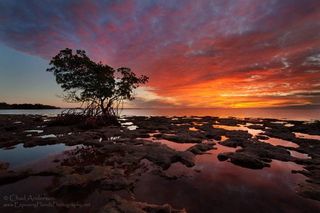 The number of deer living in the Florida Keys shrank to a population of 27 in 1957. They've rebounded to approximately 800 today, in large part due to a protected refuge 100 miles (161 kilometers) south of Miami.

Established in 1957, the National Key Deer Refuge aims to protect and preserve deer and other wildlife in the Florida Keys. The 9,200-acre refuge is in the lower Florida Keys, and is home to 22 federally-listed endangered and threatened species of plants and animals — ?ve of which are found nowhere else in the world.

Key deer are an endangered subspecies of white-tailed deer. They live only in the Florida Keys.

Wildlife in the Key refuge thrives among mangrove forests, tropical hardwood hammocks and freshwater and salt marsh wetlands. The varied landscape is also critical for the birds that call the refuge home, as well as those that migrate through here. In addition to deer and birds, the refuge is home to the lower Keys marsh rabbit and the silver rice rat.

Keep an eye out for Key deer when driving at night in the Keys. They aren't nearly as shy as their mainland kin and they can often be found swimming between the islands.