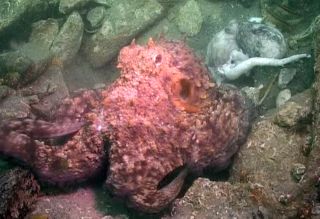 When octopuses go hunting for prey, they sometimes end up "dining" on members of their own species, and the cephalopods seem to have a taste for their victims' arm tips.

Divers have captured video of this octopus-on-octopus action in the wild for the first time on video.

In a new study, researchers described three cases of cannibalism in the common octopus — Octopus vulgaris — recorded with a camcorder by scuba divers in Ría de Vigo, Spain, located on the northeastern Atlantic coast. In two of the cases, the predators had started to eat the tips of the arms of their prey by the time the divers found them. [See Images of the Cannibalistic Octopus]

And, in one of the cases, the predator had access to more "traditional" prey in the form of mussels, but it still chose to feed on another, smaller octopus.

Although scientists had been aware of cannibalism occurrences among members of O. vulgaris, the previously reported cases were known only from analyses of stomach contents and laboratory observations, the researchers wrote in the study published Sept. 8 in the Journal of Comparative Psychology.

However, "this behavior has never been described from direct observations in the wild by scuba diving," said study author Jorge Hernández-Urcera of the Institute of Marine Research (IIM) in Vigo, Spain.

The researchers documented the first of the three cannibalism cases on Dec. 11, 2012, at a depth of 40 feet (12 meters), on a rocky bottom off the Cíes Islands, which are part of the National Park of the Atlantic Islands of Galicia (NAPAIG). A male octopus weighing about 4.85 pounds (2.2 kilograms) was holding in its grasp a smaller octopus without visible sexual characteristics, which weighed a bit less than a pound (about 400 grams). [See Video of the Cannibalistic Octopus in Action]

"The animal was dead, showing a pale white color and the tips of its arms had been eaten," the researchers wrote.

The second case was recorded July 13, 2013, on a sandy bottom about 60 feet (18 m) below the surface near the Estelas Islands. A male octopus of about the same weight as the in first case carried an octopus weighing a bit more than a pound (540 grams) inside a ball-shaped sack that it had formed with its arms and web – the skin between its arms that it can spread to capture prey.

The diver who recorded the case realized that "the prey was still alive, because it poked and moved one of its arms between the dorsal pair of arms of the predator," the researchers wrote. The diver disturbed the predator, which in turn let go of the prey, letting it escape, and therefore the researchers classified this case as "an attempted predation."

The third recorded case occurred Nov. 26, 2013, at a depth of about 45 feet (14 m), on a rocky bottom off the Cíes Islands, also within NAPAIG. A female octopus of almost 4 pounds (1.8 kg) was holding an octopus weighing less than a pound (about 350 grams), of unknown sex. The prey was already dead when the diver saw it, "with a pale white color and the tips of the arms eaten," the researchers wrote.

Cannibalistic behavior in octopuses may be motivated by various factors, the researchers said.

When octopuses are in captivity, and too many of them are introduced to the same aquarium or an on-growing cage – a type of floating cage in which octopuses are reared, they may resort to cannibalism as a means of defending their territory, Hernández Urcera said.

"The existence of territoriality in octopuses is, however, controversial," he said, adding that studies have shown varying results on this phenomenon.

Territoriality, the lack of available prey and the vulnerability of smaller males to being eaten by larger females are some of the potential reasons for cannibalistic behavior among octopuses in the wild, Hernández Urcera told Live Science.

However, the researchers think the most probable cause of cannibalism in the cases observed is the high net energy gained from preying on other octopuses.

For example, when an octopus feeds on a smaller member of its species, it receives the same amount of energy it would get by feeding on a large number of mussels — its common prey, Hernández Urcera said. But the cost of capturing another octopus is lower than the energy cost of snagging all of those mussels. In addition, an octopus may choose to feed on another member of its species instead of mussels because itcan get more protein per gram from octopus meat than from mussels. Moreover, handling another octopus requires less energy than opening the number of mussels whose weight would be equivalent to the weight of meat provided by a single octopus.

The research was conducted under the leadership of Angel Guerra of the Institute of Marine Research in Vigo, as part of the Cefaparques Project funded by Spanish National Research Council.