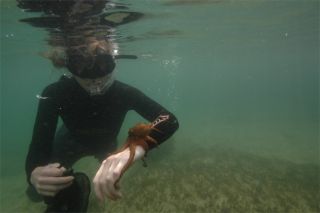 Researcher Renata Pronk catching and releasing the so-called gloomy octopus. The eight-legged animal is common in Australia where it feeds on shellfish. Copyright Rob Harcourt.

Octopuses rely on visual cues to identify predators, prey and other marine creatures. Yet it has been difficult for researchers to study the animals' reactions to their natural environments, because the scientists can't control what might swim or crawl by an octopus — that is, until the advent of HDTV.

Researchers from the Sydney Institute of Marine Science found that by playing video on a liquid crystal high definition television for gloomy octopuses (Octopus tetricus), they could accurately see how the animals reacted to prey (a crab), a new object (a jar), and a potential predator (another octopus), responses usually only seen in the ocean. Observations reveal that that the individual octopuses have episodic personalities, according to details of the study published in The Journal of Experimental Biology.

"This new video playback technique is great news for researchers, because they can use it to study many different aspects of octopus behavior that can't otherwise be discerned using traditional techniques," lead author Renata Pronk, a marine biologist at Macquarie University in Australia, told LiveScience.

Octopuses have very sophisticated eyesight, making everyday mirrors or videos, controllable tools that could help biologists see how the animals interact with their surroundings, ineffective in a lab. Essentially, the creatures know that the visuals aren't real.

New display technologies, however, make movies look more realistic, leading Pronk and her team to try HDTV. After some tinkering, they found that the octopuses reacted strongly to what they saw on the screen.

"This is the first time such a strong, appropriate response has been shown from a cephalopod to video," said Pronk. "The octopuses' reactions were the same as the way they react to these objects out in the ocean. For instance, when an octopus sees a crab out in the ocean, they generally try to sneak up or jet over to it and envelope it under their arms. This is how the octopuses reacted to the video crab."

The high-quality footage displayed with the latest and greatest technology led to the reactions, said Pronk. Seeing such significant responses, Pronk decided to explore whether the individuals had personalities by exposing them to videos over the course of a few days.

If an octopus has a distinct personality, the researchers would expect to see the same behaviors from a certain individual consistently over time. Yet during the experiment, an octopus showed interest in the video one day, and seemingly became bored the next. Pronk uncovered that the octopuses have episodic personalities, meaning they display consistent traits over short periods of time, but longer-term, their behaviors changed completely.

"In short, they had what appear to be very short-lived personalities," she said.

Her discoveries, with the help of future experiments that use HDTV, could help marine biologists find out more about the behavior of octopuses and other cephalopods, like cuttlefish and squid.

"We can hopefully answer many more questions about cephalopod behavior using video playback," said Pronk. She would like to find out what it means when they change color, and if they can learn from each other. "This study raises even more questions about octopus personality," she said.