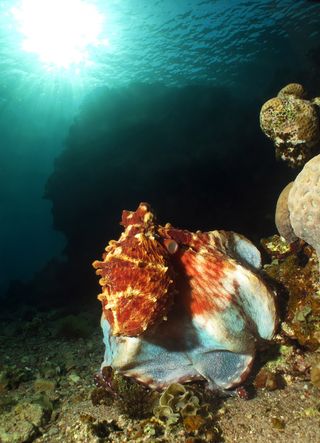 Octopuses camouflage themselves by matching their body pattern to selected features of nearby object, like this one looking suspiciously like a conch shell.
(Image: © Keren Levi)

Instead of blending in with the background, octopuses hide from predators by taking on the shape and color of specific objects in their environment, new research suggests.

"Octopuses are considered to be the master of camouflage. An octopus can change its color, pattern and texture of its skin in an instant," study researcher Noam Josef, of Ben-Gurion University in Israel, told LiveScience.

"By reproducing key features of well-chosen objects, the octopus can produce an effective camouflage that may fool a wide range of potential predators," Josef and colleagues write online today (May 23) in the journal PLoS ONE.

There are a few different ways that animals use camouflage to hide. Some adopt the color or texture of their surroundings, taking in the environment as a whole like, say, a mouse that evolves to have a lighter color because it lives on the beach.

Other animals hide from predators by looking similar to nearby objects, mimicking just part of the environment, instead of the whole.

To see how octopuses do it, the researchers analyzed images of 11 octopuses of two species, O. cyanea and O. vulgaris, in their natural habitats of the Red Sea and the Mediterranean Sea, respectively. A computer program was able to detect what parts of the environment were most similar to the color and texture of the octopus' skin in each of the images. In all pictures, the octopus only matched the texture of part of the environment — say a coral reef — the computer analysis showed.

Not only does the octopus have to fool all different types of visual systems, it also needs to be hidden from every angle, what the researchers call the "point of view" predicament: The predator could be a fish looking down on the octopus, or, if it's an eel, it would be at eye level.

"The octopus does not imitate the object precisely (in our case, it does not look exactly like any given branching coral), but rather uses key features of the objects common in its surroundings," the authors write in the paper. "A possible advantage to such a mechanism is that it can fit a wide range of locations even if the exact level of the match is not perfect."

The octopus is well-known for its shape-shifting abilities, and can change not only its shape, but also its color and texture to blend in. Interestingly, they can do this even though octopuses are essentially colorblind.

"All field observations support the fact that there is a great color-match between the octopuses and their surroundings," Josef wrote LiveScience in an email. "However, there are many physiological studies showing that these animals simply cannot see colors."