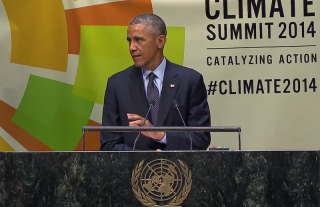 President Barack Obama spoke in front of more than 120 world leaders gathered at the United Nations headquarters in New York today (Sept. 23) to deliver a message for cooperative action on climate change.

Climate change, Obama said, promises to define the next century more dramatically than any other global threat, including terrorism, political instability, inequality and disease. "No nation is immune" to its damaging effects, the president added.

"We cannot condemn our children and their children to a future that is beyond their capacity to repair," Obama told the audience at the daylong U.N. Climate Summit. [8 Ways Global Warming Is Already Changing the World]

Though Obama and other world leaders made pledges to tackle climate change today, member nations of the U.N. General Assembly didn't dive into climate negotiations or make any legally binding global pacts. Rather, it's hoped that today's summit will drum up support (and agreement) for action ahead of the 2015 Paris climate conference, where U.N. members are expected to hash out a more thorough agreement to curb the damaging effects of climate change.

The president called on other nations to shed the fear that adopting measures to fight climate change will put them at an economic disadvantage. The United States is the second-biggest emitter of greenhouse gas pollution in the world, behind China. Chinese President Xi Jinping was notably absent from the meeting, but Obama said he spoke with Chinese Vice Premier Zhang Gaoli and "reiterated my belief that as the two largest economies and emitters in the world, we have a special responsibility to lead."

Obama said the United States recognizes that it played a significant role in creating the problem — and embraces the responsibility to fight it. But he added: "We can only succeed in combating climate change if we are joined in this effort by every nation, developed and developing alike."

The White House announced an executive order today that will require federal agencies to take climate change resilience into account in international development work. Obama said these efforts will help developing economies skip pollution-heavy technologies on their road to growth and prepare these nations for the extreme weather events that are expected to become more frequent in a warming world.

Among other new initiatives the White House rolled out today is an effort — led by the National Oceanic and Atmospheric Administration (NOAA) — to develop reliable extreme weather outlooks beyond the current 14-day forecasts. (Specifically, NOAA will seek to predict weather 15 to 30 days in advance.)

In his speech, Obama highlighted some of the efforts that he unveiled last year as part of his climate action plan, which was designed to curtail U.S. greenhouse gas emissions, prepare American communities to endure extreme weather events and develop clean energy alternatives, among other initiatives. Obama also revived his pledge to reduce greenhouse gas emissions to 17 percent below 2005 levels by the year 2020, and said he would put forth the nation's next target by next year.