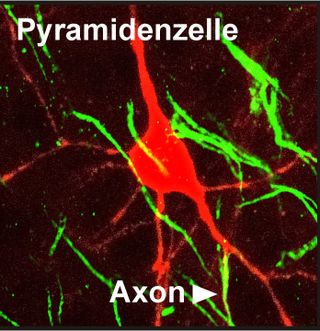 A neuron with an axon protruding directly from a dendrite rather than from the cell body. Signals to this dendrite are forwarded more effectively than signals to other dendrites on the cell.
(Image: © Alexei V. Egorov, 2014)

The discovery of a new shape of brain cell has neuroscientists scratching their heads over what the function of these neurons might be.

Though neurons come in different shapes and sizes, the basic blueprint consists of a cell body, from which protrudes spindly appendages called dendrites and axons. Dendrites are branchlike structures that receive signals from other nerve cells and deliver them to the cell body. The neuron then processes the signals and zaps along information to the next cell via a long projection called the axon.

At least, that's how it normally works. The newly discovered cells have a different, and until now, unknown process. In these cells, the signals skip the cell body altogether, instead traveling along an axon that projects directly from one of the dendrites.

"We found that in more than half of the cells, the axon does not emerge from the cell body, but arises from a lower dendrite," study researcher Christian Thome, a neuroscientist at Heidelberg University and the Bernstein Center Heidelberg-Mannheim, said in a statement. [10 Totally Fascinating Brain Discoveries]

The new cells were discovered in the mouse brain. Specifically, they are found in the hippocampus, a deep-brain structure involved in memory and navigation. Humans have the same general brain structure and types of hippocampus cells as mice.

The hippocampus is home to extensively branched neurons called pyramidal cells, so dubbed because of their triangular cell bodies. To map out the connections between these cells, researchers used a fluorescent red protein that stuck to the origin of each axon protruding from a cell.

The team expected the axons to extend from the cell bodies. Instead, they saw that in many cases, the axons emerged from the branching dendrites instead. The base of the hippocampus is divided into areas labeled CA1, CA2, CA3 and CA4. The most common site for strangely shaped cells was in the CA1 region, where about 50 percent of cells had dendrite-originating axons. About 28 percent of cells in the CA3 region were the newly discovered shape.

To find out how these oddly placed axons functioned, the researchers used light pulses to activate a neurotransmitter called glutamate. Neurotransmitters are the chemicals released by nerve cells to transmit messages from cell to cell.

They found that dendrites directly connected to an axon responded strongly to even the smallest influx of neurotransmitter, activating the nerve cell, said study researcher Tony Kelly, a postdoctoral fellow at the University of Bonn.

"That way, information transmitted by this special dendrite influences the behavior of the nerve cell more than input from any other dendrite," Kelly said in the statement. The researchers reported their findings Sept. 17 in the journal Neuron.

The question remaining is why these hippocampus cells should need these special bypasses that skip over the cell body. The unique shape seems to make the cells stronger signalers, less prone to having their responses inhibited than neurons that operate on the traditional pathway, the researchers wrote. However, it's not yet clear which signals use this "privileged" channel and why.