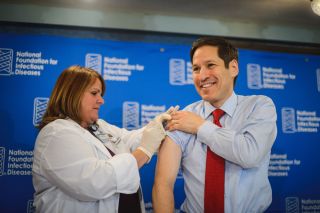 Dr. Thomas Frieden, director of the Centers for Disease Control and Prevention, urged Americans to follow his example and get a flu shot this year.
(Image: © Courtesy of the National Foundation for Infectious Diseases)

More U.S. children and adults are getting the flu shot, but public health officials say there's room for improvement in vaccination rates, particularly among young and middle-age adults.

During the 2013 to 2014 flu season, 42.2 percent of adults were vaccinated against the flu — a 0.7 percentage-point increase over the rate from the previous season, according to new estimates from the Centers for Disease Control and Prevention. Moreover, about 59 percent of children were vaccinated against influenza that flu season — a 2.3 percentage-point increase from the prior season, the CDC said.

"Last year, more kids got vaccinated than ever before," Dr. Tom Frieden, director of the CDC, said at a news conference today (Sept. 18).

But overall, just less than half of Americans — 46.2 percent — were vaccinated against the flu last season. These numbers can be seen as either a "glass half full" or a "glass half empty," said Frieden, who took the latter viewpoint at the news conference.

"It's really unfortunate that half of Americans are not getting the protection from flu that they could get," Frieden said. Getting sick with flu can result in missed days of work, hospitalizations and, in some cases, death, he said.

Vaccination rates were particularly low among adults ages 18 to 64 — only about 34 percent of people in this age group got a flu shot during the 2013 to 2014 flu season, and the flu hit this group particularly hard.

Public health officials stressed that all Americans ages 6 months and older should get a flu shot this year. Flu shots are now available across the United States.

"We can't predict what this season is going to be like," Frieden said. But "we can predict that the best way you can protect yourself against flu is to get a flu vaccination this year, and now's the time to start getting one." [6 Flu Vaccine Myths]

About 150 million doses of flu vaccine will be produced this year, including 77 million doses of the quadrivalent influenza vaccine, which protects against four strains of flu, according to projections from vaccine manufacturers. The rest of the doses will be the trivalent (three-component) vaccine. (Last flu season was the first season in which quadrivalent vaccines were available, and the CDC is working with manufacturers to increase the proportion of quadrivalent vaccine available in the coming years, Frieden said.)

"Let's put these flu vaccines to good use," said Dr. William Schaffner, a preventive medicine and infectious-disease expert at the Vanderbilt University School of Medicine, who also spoke at the news conference. "They don't prevent influenza if they are left in the refrigerator," Schaffner said.

There are several types of flu vaccines available this year: The traditional flu shot given with a needle, a nasal spray vaccine, a small-needle vaccine called an intradermal vaccine, a high-dose vaccine for people ages 65 and older and an egg-free vaccine.

In a new recommendation, health officials said that the nasal spray is the preferred vaccine for children ages 2 to 8, because this vaccine has been shown to work particularly well in this age group. However, vaccination should not be delayed if the nasal spray is not available. "Parents shouldn't shop around too much looking for it," but instead make sure that their child is vaccinated, Schaffner said.

Health officials also stressed the importance of the flu vaccine for pregnant women, who are at increased risk of complications from flu, such as having a premature birth. Flu vaccination during pregnancy can also protect babies against the virus during the first six months of life, before they are old enough to be vaccinated, said Dr. Laura Riley, an obstetrician and director of labor and delivery at Massachusetts General Hospital.

Last flu season, about 52 percent of pregnant woman in the United States were vaccinated. "We can do much, much better to protect mothers and unborn babies from this preventable illness," Riley said.

Dr. Paul Offit, a pediatric infectious-disease specialist at the Children's Hospital of Philadelphia, emphasized that influenza can be a very serious illness. Last flu season, more than 100 children in the U.S. died from the flu. Of these, half did not have a pre-existing health condition that would make them more susceptible to complications from the flu, and about 90 percent were not vaccinated against the flu.

"We often say, 'Well, it's just the flu virus... [but] there's nothing trivial about flu," Offit said.