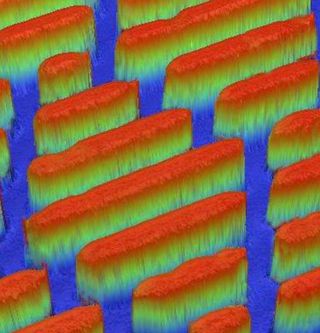 An image of Sharklet, a material that mimics the skin of sharks with microscopic ridges and grooves.
(Image: © Mann et al., Antimicrobial Resistance and Infection Control.)

A material that mimics shark skin, covered with tiny ridges and groves, may help reduce the spread of bacteria in hospitals, a new study suggests.

The study examined how well the shark skin-like material — which has bumps that are too small for the eye to see — could prevent the growth and spread of disease-causing bacteria, including Methicillin-resistant Staphylococcus aureus (MRSA) bacteria, which are resistant to the antibiotics typically used to treat staph infections, and are known for causing infections in hospitals.

The researchers set up experiments to mimic how bacteria might contaminate a surface in the "real world" — they used a paint sprayer to apply the bacteria to surfaces, to mimic sneezing, and also used a contaminated velveteen cloth to press against surfaces to represent how bacteria might spread through touching. The surfaces were then tested for bacterial contamination. [6 Superbugs to Watch Out For]

Sharklet was also better than the copper material at being able to resist contamination with methicillin-susceptible Staphylococcus aureus (MSSA), which is staph bacteria that can be treated with antibiotics. Sharklet contained 97 percent less MSSA than a smooth surface, while the copper surface harbored about as much MSSA as a smooth surface.

Rather than killing bacteria, as some antimicrobial surfaces do, the Sharklet material prevents bacterial contamination by making it difficult for bacteria to attach to the surface, the researchers said.

"Shark skin itself is not an antimicrobial surface, rather it seems highly adapted to resist attachment of living organisms such as algae and barnacles," study researcher Ethan Mann, a research scientist at Sharklet Technologies, which makes the material, said in a statement. "We have learned much from nature in building this material texture."

Some studies have shown that copper surfaces in hospital rooms reduce the percentage of people who become infected with MRSA. But copper surfaces can be expensive to implement, and it's possible some bacteria may develop resistance to the material, the researchers said. Bacteria may also need to be in contact with copper for a certain amount of time before the material kills the microbes, the researchers said.

Because the new study was conducted in a laboratory, more studies are needed in real-world settings, like a hospital room, to confirm the findings, and to see if Sharklet really does reduce the number of infections that patients acquire in hospitals.

Dr. Ambreen Khalil, an infectious disease specialist at Staten Island University Hospital who was not involved in the study, noted that one of the primary ways that MRSA and other bacteria are spread in hospitals is from a doctor or nurse's hands, if they touch an infected patient.

If a doctor forgets to wash their hands, and goes to care for another patient, having the Sharklet surface "is not going to help," Khalil said. Hand washing is the best way to prevent the spread of bacteria in hospitals, she said.

A catheter that is less likely to be colonized by bacteria is "definitely going to be helpful," Khalil said.

The study is published today (Sept. 15) in the journal Antimicrobial Resistance and Infection Control.