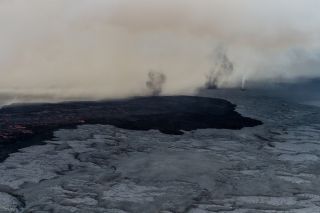 Hollywood, death by lava is such a cliché. No worries, though: Iceland is here to help. Last week, the country's cold, stormy weather and blazing volcanic eruption hatched a terrifying new way to die at volcanoes — the volcano tornado.

The toxic tornadoes were spotted in a poisonous cloud of sulfur dioxide gas spewing from Iceland's Holuhraun lava flow on Sept. 3. One narrow, swirling column stretched 3,300 feet (about 1 kilometer) into the air. A remotely monitored infrared camera caught the dramatic whirlwinds on video.

"We haven't seen anything like this before," said Fred Prata, chief technology officer at Nicarnica Aviation in Kjeller, Norway, the inventor of the infrared camera used for the images. "I was quite surprised to see it."

Nicarnica's infrared camera can track ash clouds from planes, but is now undergoing a ground-based test run in Iceland through the FutureVolc project, an international collaboration to monitor Europe's natural hazards.

The volcano tornado was most likely a spinning ribbon of sulfur dioxide gas, similar to a fire tornado, Prata told Live Science.

Tornadoes born from fires and volcanoes are completely different beasts from the lethal tornadoes spawned by powerful thunderstorms. A true tornado spins up in the atmosphere and requires colliding cool and dry air fronts, wind shear (rotating air) and warm, moist air near the ground.

But narrow volcano and fire whirlwinds rise from ground level, not from high in the sky. In these terrible twisters, superheated dry air starts spinning faster and faster until the vortex tightens into a tall, tornadolike column. (The phenomenon is similar to a figure skater who rotates faster by tucking her arms closer to her body.)

The Icelandic Met Office has warned of the risk of volcano tornadoes, though its official terminology refers to the phenomenon as "wind anomalies from thermal convection." Last week, officials arrested tourists who ventured too close to the hazard zone. Scientists and journalists were also asked to leave the lava field the same day the volcano tornadoes appeared, due to the hazardous conditions.

Despite the risks, professional photographer Einar Gudmann also caught the volcano tornadoes in action on Sept. 1, and posted photos on his website.

Iceland's eruption blazed to life on Aug. 28 north of Bardarbunga volcano, in the Holuhraun lava field. The basalt lava flow is now plowing through the Jokulsa a Fjollum River as of Sept. 7, diverting but not blocking the channel. The glowing lava covers 7.3 square miles (19 square km).