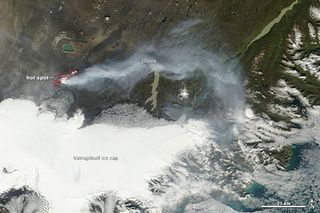 The lava erupted Sept. 5, just 1.2 miles (2 kilometers) north of Dyngjujokull glacier. Magma rose through cracks in the ground in a long depression called a rift valley. The valley appeared just a few days earlier, when the ground shifted to accommodate the fresh magma feeding the older Holuhraun eruption to the north.

Iceland's Civil Protection Agency has restricted travel near the glacier for fear of flooding. Iceland has a long history of spectacular glacial floods triggered when volcanoes erupt underneath or next to glaciers, and Dyngjujokull glacier is already feeling the heat. On Sept. 3, an inspection flight spotted a half-mile-wide (1 km) pit in the glacier's surface. The circular depression could signal melting from geothermal activity or a small subglacial eruption. If the new lava flow reaches the glacier, it could also trigger an explosive burst of ash. [Gallery: Beautiful Images of Bardarbunga's Volcanic Eruption]

Vigorous activity still continues at the surface eruption that began Aug. 28, when lava broke through a fissure in the 200-year-old Holuhraun lava field between Bardarbunga volcano and Askja volcano. Sputtering lava built small cones, and fiery fountains shot up to 328 feet (100 m) in the air. A plume of steam and sulfuric gas reached 15,000 feet (4,500 m) high, the Icelandic Met Office said.