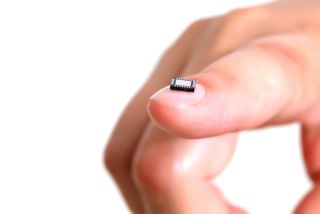 The recently launched Atoms to Product (A2P) program aims to develop atom-size materials to build state-of-the-art military and consumer products. These tiny manufacturing methods would work at scales 100,000 times smaller than those currently being used to build new technologies, according to the Defense Advanced Research Projects Agency, or DARPA.

The tiny, high-tech materials of the future could be used to build things like hummingbird-size drones and super-accurate (and super-small) atomic clocks — two projects already spearheaded by DARPA. [Humanoid Robots to Flying Cars: 10 Coolest DARPA Projects]

"If successful, A2P could help enable [the] creation of entirely new classes of materials that exhibit nanoscale properties at all scales," John Main, a program manager in DARPA's defense sciences office, said in a statement.

When materials are created with dimensions of about 1 to 100 nanometers (that's between one and 100 billionths of a meter), the materials' properties change significantly. At nanoscales, materials may have different melting points, electric conductivity, magnetic properties and different reactions with certain chemicals, according to the National Nanotechnology Initiative, a U.S. government program.

Those nanoscale properties also offer advantages for larger materials, according to DARPA researchers.

And these atomic-scale properties can lead to certain advantages when it comes to building both military and civilian technology, DARPA said. The agency said it believes it can use tiny materials to make products whose parts stick together without glue or other adhesion methods. These materials could be used to build armorthat can withstand rapid changes in temperature.

DARPA also wants to explore what it calls "tunable" light absorption and scattering. "Tunability" refers to another quality of nanomaterials: By changing the size of the particles in a material, scientists can literally fine-tune certain properties of that material to better suit the researchers' purposes, according to the National Nanotechnology Initiative. DARPA has shown interest in using tunability to create technology, perhaps sensors or microchips,that only absorb or reflect certain wavelengths of light.