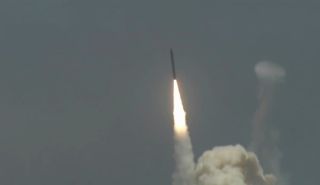 An interceptor is launched from Vandenberg Air Force Base in California during a test of the U.S.'s ground-based missile defense system.
(Image: © Boeing )

Last month, the U.S. military's missile defense system successfully destroyed a mock enemy target high above the Pacific Ocean. The triumphant test was a much-needed win for the nation's Ground-based Midcourse Defense (GMD) system, and a huge relief for Boeing, the aerospace defense contractor behind the $40 billion project.

But the successful test comes on the heels of three failed tests of the Boeing-designed system. The most recent of these unsuccessful tests was due to what engineers with the company called an "impossible" problem. It was impossible, they said, because it required them to recreate a spacelike environment here on Earth.

The need to recreate spacelike conditions is a result of the very nature of Boeing's missile defense system. It's designed to intercept ballistic missiles at the height of their trajectory, when they're outside Earth's atmosphere, more than 62 miles (100 kilometers) above the planet's surface. [7 Technologies That Transformed Warfare]

The system works by launching aso-called interceptor (similar to a high-speed rocket, but without the explosives) into space. The interceptor locates and tracks missile targets using complex radar, sensor and tracking systems, according to Boeing. Once it reaches the outer limits of Earth's atmosphere, the interceptor deploys a small device located inside its tip — called an Exoatmospheric Kill Vehicle (EKV) — that can destroy a missile by colliding with it at hypersonic speed.

At least that's how the missile defense system is supposed to work. But as Boeing has learned the hard way over the past decade and a half, getting both the interceptor and EKV to work properly at such high altitudes is a challenge. A July 2013 test of the GMD system failed because of what Boeing engineers called "conditions outside of Earth's atmosphere."

Exactly what those conditions are is hard to say, said Cindy Belliveau, a structural dynamics engineer at Boeing. To determine the cause of the problem, engineers had to sift through mounds of data and then make their best guesses as to what might be causing the issues.

"It's hard to reproduce [spacelike conditions]. You're not up there, so you don't know what happens," Belliveau said in a video posted on Boeing's website. "You have lots of different stories, and you pick the one that makes the most sense or is the most likely."

In the case of the most recent failed intercept test, Boeing engineers determined that the likely cause of the failure was the presence of high-frequency noises that occur in space. These frequencies, or pitches, can interfere with the interceptor's radar and tracking system, which it uses to pinpoint its target in space, according to the engineers.

To test this hypothesis, researchers at Boeing recreated these high-frequency pitches in a laboratory. They then bombarded the interceptor's tracking system with these spacelike noises, isolating — and ultimately fixing — the "impossible" problem.

The result of all this hard work was the successful test of the GMD system on June 22. However, this recent success might not mean that the U.S.' missile defense system is ready just yet.

Whereas the failed test in July 2013 resulted from a problem with Boeing's interceptor, previous failed tests resulted from issues with the Exoatmospheric Kill Vehicle, designed by defense contractor Raytheon, according to the Missile Defense Agency.

Each of Raytheon's EKVs is handmade and contains over 1,000 component parts, the LA Times reported. This means that no two of these devices are the same. Engineers who have worked on the kill vehicles acknowledge that a successful test of one of these devices doesn't predict the performance of EKVs used in future tests, according to the LA Times.