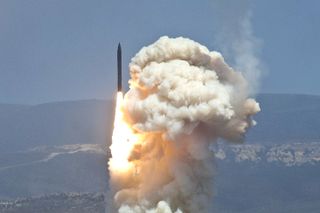 The United States military's Ground-based Midcourse Defense system was tested on June 22, 2014. An interceptor was launched from Vandenberg Air Force Base in California and successfully destroyed a mock enemy missile over the Pacific Ocean.
(Image: © Missile Defense Agency/U.S. Department of Defense)

The United States military announced this week that on June 22, a so-called interceptor launched from Vandenberg Air Force Base in California and successfully destroyed a mock enemy warhead high over the Pacific Ocean.

The successful test of the nation's ground-based missile defense system was a landmark event for the military and the government contractors responsible for developing and maintaining the country's ground-based defenses.

The Ground-based Midcourse Defense (GMD) system tested on Sunday (June 22) had previously failed its last four tests, the first of which was carried out in December 2008, reported the Los Angeles Times. Sunday's successful interception marks the first time in six years that the system proved effective at destroying a test target. [7 Technologies That Transformed Warfare]

“This is a very important step in our continuing efforts to improve and increase the reliability of our homeland ballistic missile defense system," James D. Syring, Navy Vice Admiral and director of the Missile Defense Agency (MDA), said in a statement.

Several teams of experts were behind the latest test, including members of the MDA, the U.S. Navy and the U.S. Air Force. An industry team from Boeing also participated in the test. As the lead contractor for the GMD system, Boeing is responsible for designing, producing, integrating and testing all components of the country's land-based missile defense system.

The on-shore component of the missile defense system is designed to track and destroy enemy missiles in space, long before they reach the American mainland, according to the MDA. The LA Times reports that the system has its roots in the Strategic Defense Initiative, a Reagan-era program to develop a ground- and space-based missile shield capable of rendering nuclear weapons "impotent and obsolete."

The system developed by Boeing to fulfill this order is designed with specific threats in mind. According to the MDA, Iran could develop and test a ballistic missile capable of reaching the United States by 2015. The MDA also lists North Korea and Syria as potential threats, since both are in the process of developing long- and short-range missiles.

Following the successful test, officials from the military and Boeing expressed confidence that the existing system is capable of defending against such threats.

“Today’s test demonstrated the system’s performance under an expanded set of conditions that reflect real-world operational requirements,” Jim Chilton, vice president and general manager of Boeing Strategic Missile & Defense Systems, said in a statement released Sunday. "Working together with our government, military and industry partners, we have delivered a capability that continues to demonstrate its readiness and reliability to protect the United States."

However, critics of America's $40 billion missile defense system argue that, despite Sunday's successful test, the system is in need of an overhaul. In an interview with the LA Times after the test, Riki Ellison, founder and chairman of the Missile Defense Advocacy Alliance, a group that lobbies for missile defense spending, zeroed in on one of the system components that he said needs improving: the kill vehicle.

Launched with the interceptor, the kill vehicle is a 5-foot-long (1.5 meters), 150-pound (68 kilograms) device responsible for tracking, targeting and destroying missiles in space. Sunday's test used a new version of the Exoatmospheric Kill Vehicle (EKV) developed by Raytheon, the defense contractor also responsible for developing the system's radar components. The EKV used in the test was able to successfully track and destroy the mock warhead using high-speed impact.

However, as the LA Times reported earlier this month, just because this particular kill vehicle destroyed its target, that doesn't mean the next one will. Each kill vehicle is handmade and contains over 1,000 component parts, which means that no two of these devices are the same. According to the Times, engineers who have worked on the missile defense system acknowledge that because each kill vehicle is unique, even a successful test might not predict the performance of future interceptors launched in combat.

Yet, the contractors responsible for developing more reliable technologies for the missile defense system seem willing to keep making improvements to minimize these limitations. Norm Tew, vice president of Boeing and GMD program director, said in a statement that Sunday's test will enable Boeing to keep modernizing and improving the missile defense system, providing even greater capabilities to protect the U.S. from enemy threats.