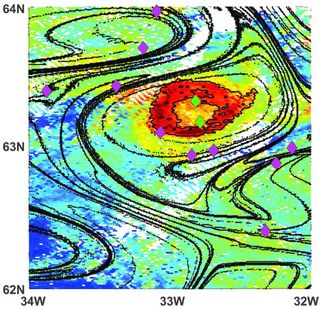 Gobs of microscopic organisms called algae may have met their match in viruses that can invade their cells, ultimately leading to death, new research suggests.

The findings may help researchers refine models that forecast algal blooms and the influence these microscopic plants have on the climate, experts say.

Algae, also known as phytoplankton, are at the bottom of the food chain and can multiply into blooms spanning thousands of miles at sea. They also carry out about half of all photosynthesis on the planet, relying on pigments like chlorophyll to capture the sun's energy and, during the process that involves carbon dioxide, turning that energy into sugars. The byproduct of the process is oxygen. [Earth from Above: 101 Stunning Images from Orbit]

"They are the foundation of the entire life at sea," said the study's co-principal investigator Ilan Koren, an associate professor of earth and planetary sciences at the Weizmann Institute of Science in Israel. "There is no life without these algal blooms."

Using satellite images, the researchers examined algae blooms and their chlorophyll concentrations from space. They focused on an algae patch in the North Atlantic that usually blooms in the spring (in the Southern Hemisphere, algae typically blooms in the fall and winter).

But satellite imagery can tell scientists only so much. It can show whether an algae patch has a decreased concentration of chlorophyll, but it doesn't explain why, Koren said.

He and his colleagues traveled to a circular 19-mile-wide (30 kilometers) bloom on a cruise to Iceland to take samples of coccolithophore algae known as Emiliania huxleyi. Viruses that kill the algae in boom-and-bust cycles, they found, were widespread in the samples. Evidence also suggested that the algae cells broke down in a way that is indicative of a viral infection.

Researchers have hypothesized that viruses probably control the proliferation of blooms, but this is the first study to show satellite evidence that viruses contribute to the demise of algal blooms, said Steven Wilhelm, a professor of microbiology at the University of Tennessee in Knoxville, who was not involved in the study.

"We've been studying [marine] viruses now since about 1990, when they re-emerged as being important," Wilhelm told Live Science. "Twenty-five years later, many of our ideas and hypotheses are being proven by really solid research efforts like this one."

Several factors can influence a bloom's well-being, including available sunlight and surrounding grazers such as zooplankton that eat the algae, Koren said. Many algae also thrive if the first 32 to 65 feet (10 to 20 meters) of the ocean are well stratified from deeper, colder layers of water where there is less light for photosynthesizing.

But if all of these conditions are stable, then biological processes, such as viral infections, may account for the decline of an algal bloom, Koren said.

"This is a huge step toward understanding the ecology in its natural scale," Koren added.

The North Atlantic bloom they examined likely converted 24,000 tons of carbon dioxide from the atmosphere, a weight equivalent to 120 blue whales, the largest animals on Earth. The algae converted the carbon dioxide into energy-providing organic carbons in a process called carbon fixation. (Phytoplankton must "fix" carbon before it can use it during photosynthesis.) Within one week, two-thirds of that carbon turned over as the bloom quickly grew and then expired.

What happens to carbon when an algal bloom dies has tantalized scientists for decades. It's unknown if it sinks into the ocean when the algae die, or if it gets released into the atmosphere as a contributor of global warming.

The lab of Assaf Vardi, assistant professor of plant sciences at the Weizmann Institute of Science, also contributed to the research. The study was published today (Aug. 21) in the journal Current Biology.