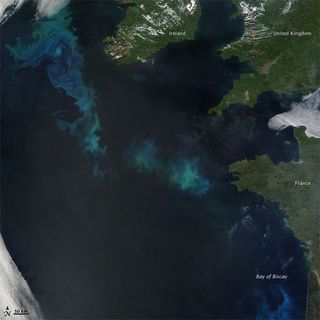 A phytoplankton bloom in the North Atlantic. This is not an image of the bloom reportedly spawned by iron dumping in the Pacific Ocean.
(Image: © Terra – MODIS / NASA Earth Observatory)

In what is being hailed and demonized as the world's largest geoengineering experiment, a businessman has reportedly dumped a massive amount of iron sulfate into the Pacific Ocean, according to an investigation of satellite images by The Guardian.

"The dump was part of a $2 million bid to drive a surge in salmon populations and is currently under investigation by Environment Canada's enforcement branch," according to Smithsonian.com.

Russ George of California allegedly dumped 220,462 pounds (100 tonnes) of iron sulfate into the ocean off the west coast of Britsh Columbia, Canada, where, as he has claimed, the nutrients spawned a phytoplankton bloom spanning an area of 3,861 square miles (10,000 square kilometers). Satellite images show the vast plankton bloom from space.

Geoengineering, or the intentional manipulation of the planet to combat global warming, is at the very least controversial. Ideas have ranged from sucking the greenhouse gas carbon dioxide from the air and burying it deep in the deep ocean to building a space-based sunshade to block radiation from warming the planet.

The current unauthorized experiment is in ocean fertilization, which entails providing iron to the teensy marine plants and photosynthetic microbes in the ocean. Just as fertilizing crops on land can spur growth, adding the necessary nutrient of iron to the ocean can cause plankton blooms.

As the phytoplankton grow, the idea goes, they would also take in carbon dioxide and then sink to the bottom of the ocean, sequestering the gas far from the atmosphere. Many scientists and others have warned that these schemes could have unintended environmental side effects, let alone acting as a sort of band-aid for man-made climate change.

Besides the debate over its usefulness and safety among the scientific community, ocean fertilization on this scale violates two international moratoria, according to The Guardian article.

According to The Guardian, George is the former chief executive of Planktos, Inc., known for its previous failed efforts to dump such plankton "food" near the Galapagos and Canary Islands. Since then, The Guardian reports, the Spanish and Ecuadorian governments have barred his vessels from their ports, while the U.S. Environmental Protection Agency warned him that flying a U.S. flag for the Galapagos experiment would violate U.S. laws.