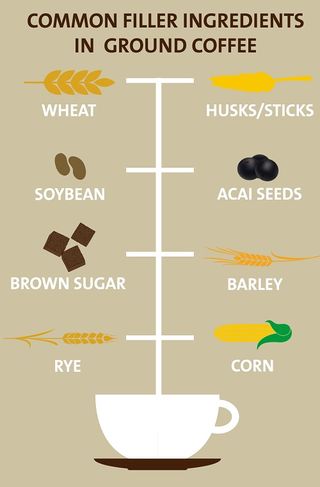 Cream and sugar may not be the only additives in your morning cup of coffee. Tough growing conditions and rising demand are leading some coffee producers to mix in wheat, soybean, brown sugar, rye, barley, acai seeds, corn, twigs and even dirt.

The filler ingredients are natural and don't pose any immediate health risks for most people. But these additives could be a serious problem for people with soy or wheat allergies, said Suzana Lucy Nixdorf, a researcher at Universidade Estadual de Londrina in Brazil.

That's why Nixdorf developed a chemical test that can spot the difference between a batch of pure coffee grounds and a batch with unwanted ingredients. [10 Things You Need to Know About Coffee]

According to a 2013 report from the National Coffee Association, 83 percent of Americans drink coffee, up from 78 percent in 2012, and 63 percent said they drink it daily. The health benefits of coffee are still unclear.

As the demand for coffee increases, high temperatures, drought and a plant disease known as "coffee rust" are devastating Arabica coffee trees (Coffee arabica), which produce one of the most popular kinds of coffee bean and are grown in high-altitude farms in Central and South America.

Brazil, the world's leading producer of coffee, usually cranks out about 55 million 132-lb. bags (60-kilogram bags) each year. But a devastating drought that hit the country in January and lasted through March means Brazilian coffee growers may produce about 10 million fewer bags this year, according to the International Coffee Report issued by Informa Agra, Inc. The 10-million-bag difference translates to about 42 billion cups of coffee lost.

That doesn't mean caffeine addicts and coffee lovers should start hoarding coffee beans. Producers will likely be able to keep up with the growing demand, but they may have to rely more on lower-quality coffee, Gleidson Patto, a coffee cost analyst for Pinhalense, which makes equipment for farmers, told National Geographic News.

These trends will eventually drive up the price of coffee and are already encouraging "coffee counterfeiting," experts say, as fillers can make supplies of pure ground coffee last longer and boost profits.

How to spot coffee fraud

Right now, one way to detect counterfeit coffee is to put the grounds under a microscope and try to spot the filler ingredients, Nixdorf said. But after roasting and grinding the beans, it becomes impossible to spot any twigs, berries or even dirt that blend in with the dark grounds. Nixdorf said it is common for Brazilian growers to produce very dark roasts so the filler ingredients blend in better.

Counterfeit coffee can also be identified by taste. For example, coffee grounds mixed with corn will produce sweeter tasting coffee, but the subtle flavor change can be hard to detect, Nixdorf said.

Nixdorf invented a new test that analyzes the chemical composition of coffee. She uses liquid chromatography, a process that creates a unique "fingerprint" stain for each ingredient. First, brewed coffee is sent through a pressurized pump. The coffee passes through a special paper filter. Each ingredient in the coffee will interact differently with the filter and will flow through it at different rates. The ingredients are separated out by the length and color of the stain they leave behind. The filler ingredients have different sugar levels than the natural compounds in coffee, and they leave behind distinct stains. Nixdorf said the test can tell if filler ingredients are mixed into coffee grounds with 95 percent accuracy.

For now, the chromatography test can be done only in a lab. Nixdorf recommended that consumers stick to whole-bean coffee or buy from reliable brands and coffee shops they trust.

Nixdorf's research was presented at the National Meeting & Exposition of the American Chemical Society in San Francisco last week.