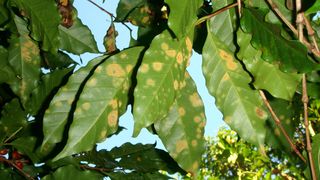 The U.S. government, leading scientists from around the world and a multibillion-dollar industry are teaming up to fight one of the biggest threats modern civilization has ever faced.

No, it's not terrorism or climate change they're battling — it's coffee rust, a microscopic fungus that's wreaking havoc on coffee crops in Central America.

Specifically, the pest is attacking arabica coffee trees (Coffea arabica) that produce the high-end, superior brews favored by cappuccino drinkers worldwide. The fungus has already wiped out the arabica variety in places like Java in Indonesia, which once produced much of the world's best coffee. [10 Things You Need to Know About Coffee]

In conjunction with the U.S. Agency for International Development (USAID), World Coffee Research is embarking on a $5 million research initiative to combat coffee rust.

What is coffee rust?

Also known as coffee leaf rust or Hemileia vastatrix, the fungus spreads easily through the air on spores. Once it infests a tree, it's virtually impossible to contain, though some strict quarantine efforts have proven effective at minimizing the spread of the fungus.

Coffee rust produces small, yellowish spots on the underside of coffee leaves; these eventually turn a rusty reddish-brown color. Leaves affected by coffee rust will eventually fall off, leaving the trees almost bare. Within a few years, the tree will die if untreated.

In some areas, coffee plantations have moved to higher altitudes, where the fungus has difficulty reproducing. There are chemical fungicides — particularly copper-based fungicides such as copper oxychloride — that can be effective when used during the rainy season (the fungus spreads best in rainy weather).

First discovered in East Africa in the 1800s, coffee rust has a nasty legacy. It virtually wiped out the coffee industry in much of Asia: The Philippines, Indonesia and Sri Lanka were particularly hard-hit, and those countries no longer produce coffee in significant amounts.

The fungus has now spread around the world and has been reported in Brazil, Costa Rica, Panama, Honduras and El Salvador. In 2013, Guatemala declared a state of emergency over the devastation wrought by coffee rust.

Coffee or (other) drugs

In Central America, the dry season of 2011-2012 was unusually wet, allowing coffee rust to spread unfettered, according to the BBC. And the fungus has now mutated to a form that can thrive at higher altitudes, placing those coffee plantations at risk.

In a $100 billion industry that employs some 25 million workers worldwide, according to Business Insider, this is nothing less than a crisis.

"The current coffee-rust outbreak is the worst in Latin America's history," USAID said in a statement. "It is estimated that production will fall by as much as 15 to 40 percent in the coming years."

Part of the reason USAID and other governmental and nongovernmental agencies are getting involved isn't simply to lower the price of a cup of joe. It's also because small growers and seasonal workers in places hard-hit by coffee rust are expected to turn to other sources of income, namely cocaine and other illegal narcotics.

The USAID-Texas A&M program is just one part of the federal government's Feed the Future initiative, an international anti-hunger and anti-poverty effort that has reached 7 million small farmers and 12.5 million children, according to the USAID statement.