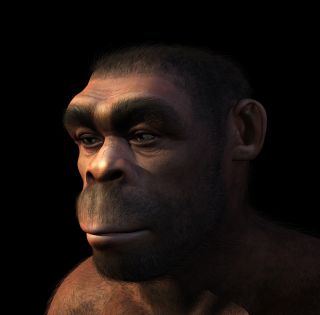 As humans began to form cooperative communities, craft tools and work together, their aggression levels began to decrease, resulting in less of a need for the robust facial features of a caveman. The result? Thinner skulls, lighter brows and rounder heads, the researchers said. Such changes can be traced to testosterone levels acting on the human skeleton, they added.

The study is the first to suggest that an increase in social tolerance and a decrease in testosterone led to the well-known reduction in facial size from the Middle Stone Age, about 50,000 years ago.

But not everyone is sold. Richard Bribiescas, an anthropology professor at Yale University, said that many other factors beyond social cooperation could have acted on testosterone. "It is well-established that testosterone physiology is influenced by a wide range of environmental factors, such as diet and activity, making behavioral associations in living humans very challenging and in the fossil record extremely difficult," wrote Bribiescas in an email to Live Science, adding that the area of research is an interesting one.

For the new study, Robert Cieri, a graduate student at the University of Utah, and his colleagues measured the brow ridge, facial shape and interior volume of more than 1,400 ancient and modern skulls, some older than 80,000 years and deriving from 30 different ethnic populations. Cieri found a trend among the skulls: Over time, the size of brow ridges began to decrease and the upper portions of the face began to appear shorter. These traits, past research suggests, indicate lower testosterone acting on the body. [In Images: Skulls of Roman Gladiators and War Captives]

"It's quite fascinating that a simple and relatively quick change in testosterone levels could have accounted for so much behavioral innovation," Cieri wrote in an email to Live Science. Referring to the early production of tools, art and communities, Cieri said, "one of the greatest leaps forward in human history may have been enabled not by bigger or better-organized brains, but by a switch to a more cooperative temperament."

About 50,000 years ago, evidence suggests that humans began to make art, develop advanced tools and form communities built on cooperation. Because they were looking for any skull changes associated with this behavioral revolution, Cieri and his colleagues compared two groups of fossil skulls: 13 from 200,000 to 90,000 years ago, and 41 from 10,000 to 38,000 years ago. Though they couldn't discern small changes in the skulls of the two groups, they did find an overarching, significant change in the skull characteristics of each and speculated that the change was due to testosterone.

The findings build on previous research into testosteroneand domestication in animals, including behavioral differences linked to testosterone found between bonobos and chimpanzees, said Cieri. Bonobos have much less testosterone than chimps and are known to be more cooperative. Researchon Siberian or domesticated silver foxes also found that particular generations of foxes began to take on a more juvenile appearances and tamer behavior if they were less wary and aggressive.

But the new study has its limitations, including the fact that there just aren't many measurable human skulls available, and scientists can't measure the hormones of the deceased, Cieri said.

"We can't directly measure testosterone levels of long-dead people, and therefore can't be completely sure what the levels were," said Cieri. "Nonetheless, we understand how testosterone affects the faces of modern humans, and humans from 50,000 to 200,000 years ago probably would have responded similarly, because they are almost skeletally indistinguishable from living humans." [Taller, Fatter, Older: How Humans Have Changed in 100 Years]

The findings provide "an exciting clue about our rougher past," said Richard Wrangham, a primatologist at Harvard University. "Maleness in anatomy tends to be correlated with maleness in behavior, so the evidence that early male [Homo] sapiens had more exaggeratedly male faces than today provides an exciting clue about our rougher past. The evolution of more aggressiveness is relatively well-understood compared with the evolution of reduced aggressiveness.

However, others see some holes in the study. For instance, Susan Antón, an anthropology professor at New York University not involved in the study, said many other factors besides cooperation, like food availability, could have influenced changes in facial features. For example, human populations that have suffered from insufficient nutrition over a long period of time may have evolved to have smaller adult bodies and faces over time, Antón said.

"I think the authors are right in considering that social tolerance likely had some unintended [anatomical] consequences, just as we see in the silver foxes," said Antón, referring to the observations of tamer domesticated silver or Siberian foxes. "Yet figuring out when and what is more complicated. Circulating hormones were likely part of these consequences, but there doesn't seem to be a simple correlation between a specific level of circulation and a specific [thinning of the human skull]."

Nevertheless, Antón said the study contributes to an exciting new theme in evolutionary studies that links separate and specialized fields like skull morphology and behavior together to create new models for empirical testing.

The article was published Aug. 1 in the journal Current Anthropology.