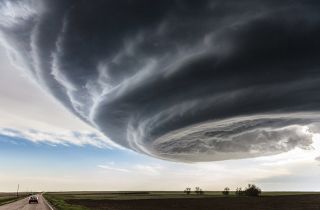 A behemoth storm swirling above Colorado, a seemingly magical underwater forest and a billowing volcanic eruption are just some of the scenes that come to life in award-winning images from National Geographic's Traveler magazine photo contest.

The winners, announced this week, were chosen from more than 18,000 breathtaking submissions.

Marko Korošec from Slovenia snagged first place with his photo of a supercell swelling over eastern Colorado. The storm brewed for more than an hour and spewed rain and hail, but never developed into a full-fledged tornado. Korošec called his photo "The Independence Day,"since the swirling spaceshiplike cloud reminded him of the 1996 movie starring Will Smith. [See the Stunning Traveler Magazine Photos]

"The crazy UFO-looking shape gives the impression that it's going to suck up the landscape like a tablecloth into a vacuum cleaner," Dan Westergen, director of photography for the magazine, said in a statement about the photo. "The unresolved tension in the image makes me want to look at it over and over."

Agnieszka Traczewska of Krakow, Poland, won second place for her photo of the marriage of an Orthodox Jewish couple in Jerusalem. The two 18-year-olds met only once, and were not allowed to see or speak to each other again until their wedding day.

If love is universal, this wedding image would reveal hats are not: "Photography is a powerful tool for showing the ways that people around the world are clearly different but in many ways the same," Westergen said in the statement. "The Orthodox fur hat and wedding dress are clues that this picture was taken in a very distinctive place. But the smile and laughter of the bride and groom indicate that these are teenagers reacting to a new situation."

Others took home merit prizes, including a photo showing a man on the so-called "end-of-the-world" swing overlooking the eruption of Mt. Tungurahua in Ecuador and an Indian girl getting her face painted during the Mayana Soora Thiruvizha festival.

In order to be considered for the contest, the photos could be doctored with only minor editing (like color correction) or cropping, according to the contest's official rules.

Photographers could submit entries for four categories: travel portraits, outdoor scenes, sense of place and spontaneous moments. Those entering could submit as many photos as they wanted, as long as each one was taken within the past two years of the contest entry date.

After two rounds of judging, expert photographers selected the winning photos based on creativity and overall photo quality.

The grand prize is an eight-day adventure trip to Alaska for two, second prize is a National Geographic sponsored photography workshop in New Mexico, and third place is a six-day cruise on a Maine windjammer sailboat. Several runner-up winners will receive smaller prizes like gift cards and photography lessons on DVD.