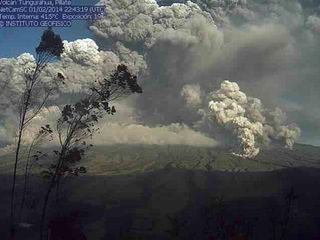 Ecuador's Tungurahua volcano exploded into life this weekend, blasting three times in an hour on Saturday (Feb. 1) and spewing ash 5 miles (8 kilometers) into the air. The ash caused total darkness in the nearby sector of Chacauco, Ecuador's Instituto Geofisico (IG-EPN) reported. The ash is streaming to the south and southwest.

Pyroclastic flows — superheated, flowing plumes of ash, gas and lava — raced more than 5 miles (8 km) down Tungurahua's slopes and crossed at least one road, the IG-EPN said. However, thanks to an early warning provided by seismic tremors beneath the volcano that started Jan. 30, nearby residents were evacuated and a state of emergency declared in the provinces of Tungurahua and Chimborazo, according to local news reports. This is the biggest eruption at Tungurahua since late October 2013.

As Tungurahua woke, an ongoing eruption at Indonesia's Sinabung volcano took a tragic turn. Mount Sinabung's violent eruption Saturday killed 16 people in Sukameriah, the first deaths since the volcano's first blasts four months ago. The deaths came one day after authorities allowed thousands of residents who had been evacuated to return to their homes, saying the volcano's activity was decreasing. However, those killed were inside a 3-mile-across (5 km) "red zone" around the volcano.