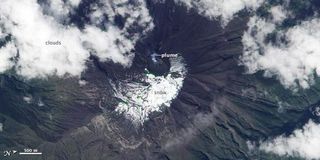 According to Ecuador's Instituto Geofisico, the Tungurahua volcano was active throughout the last weeks of 2010, with reports of ashfalls on towns near the volcano and explosions that sounded like cannons. Steam and ash plumes were observed rising as high as 36,000 feet (11 kilometers) above sea level.

The top view is a natural color image, while the one below is enhanced with shortwave and near-infrared wavelengths. Both show a small plume wafting up from the snow-capped summit through a break in the clouds. The shortwave infrared better discriminates between the plume and clouds, while showing the heat coming from the summit caldera.

Tungurahua is one of the most active volcanoes in Ecuador. The last major eruption took place between 1916 and 1918, with minor activity for several years thereafter. The volcano's location is frequently cloudy, so clear satellite views of the volcano are not common.