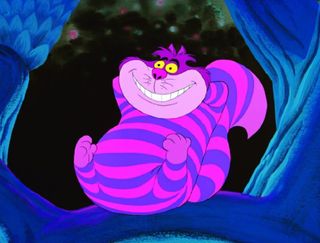 The Cheshire Cat in "Alice in Wonderland" had a smile that could disconnect from its body.
(Image: © © Disney)

The Cheshire Cat of the classic children's book "Alice in Wonderland" had a smile that could disconnect from its body. And now, in the spirit of Lewis Carroll, scientists have created quantum Cheshire Cats in the form of neutrons separated from their magnetism.

This new finding suggests that future experiments could split other properties of particles from each other, such as their charge and mass, helping to solve mysteries regarding the fundamental bits of matter that make up the universe.

In the strange wonderland of quantum physics, the particles that make up everything can behave in bizarre ways. For instance, a particle can apparently exist in two or more places at once or spin two opposite directions at the same time, a property known as superposition. [The 9 Biggest Unsolved Mysteries in Physics]

Theoretical physicists last year predicted that the peculiar nature of quantum physics might allow the properties of particles to exist in two or more places simultaneously. This mimics the story of the Cheshire Cat, in which Alice notes, "Well! I've often seen a cat without a grin … but a grin without a cat! It's the most curious thing I ever saw in all my life!"

"The most exciting thing was that we made this idea work," said lead study author Tobias Denkmayr, a quantum physicist at the Vienna University of Technology in Austria.

The scientists fired a beam of neutrons into a device known as a neutron interferometer. Inside this device is a kind of silicon crystal known as a beam splitter, whose molecular structure divides the neutron beam into an upper beam and a lower beam whose properties remain fundamentally linked, as though the neutrons were simultaneously traveling in both beams.

Magnetism can make objects align either one way or the other, just as a bar magnet can be flipped so that either its north or south pole is pointing upward. The beam splitter caused any neutrons lined up parallel to the direction they were moving to go into the upper beam, while neutrons aligned the opposite way would travel along the lower beam. [Twisted Physics: 7 Mind-Blowing Findings]

The researchers configured the interferometer to detect only neutrons lined up parallel to the direction they were traveling. This meant the device should detect neutrons only within the upper beam.

The scientists next placed a neutron-absorbing filter in the path of the lower beam. As expected, this did not change the number of neutrons the interferometer detected, since it should have detected only neutrons in the upper beam.

When one tries to measure a particle that is experiencing superposition, such as a quantum Cheshire cat, the act of measurement "collapses" that superposition — for instance, when measuring an electron that is spinning in two opposite directions simultaneously, one would see only an electron spinning in one direction or the other. This limitation would ordinarily make it impossible to detect phenomena such as quantum Cheshire Cats.

However, about 25 years ago, scientists revealed there was a way to measure particles in superposition without collapsing those bizarre states. This so-called weak measurement strategy does not analyze individual particles, but rather probes an ensemble of particles at the same time, measuring them so gently that their superpositions do not collapse. By sifting through weak measurement data from many particles, researchers can unearth phenomena such as quantum Cheshire Cats.

"You need to do lots of observations to achieve any sort of certainty that you have seen what you think you have seen," study co-author Hartmut Lemmel, at the Institut Laue-Langevin in Grenoble, France, said in a statement. "This was only possible due the strength of the neutron source available at the Institut Laue-Langevin, which can uniquely provide the numbers of neutrons required to run these repeat experiments."

Although quantum Cheshire cats have so far only been seen with neutrons, "you could see them with any quantum particle — electrons, protons, photons, you name it," Denkmayr said. "You could in principle separate the mass and charge of an electron, for example." Even more complex scenarios could separate more than two properties of particles, he added.

One potential application might be in high-precision measurements of systems that are easily disrupted by disturbances. For instance, advanced devices that rely on quantum physics — such as quantum computers, which can in principle carry out more calculations in an instant than there are atoms in the universe — are often vulnerable to slight disturbances.

The scientists detailed their findings online today (July 29) in the journal Nature Communications.