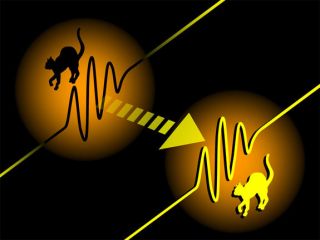 New research bolsters the validity of Schrodinger's Cat, a thought experiment suggesting a cat can be both alive and dead at the same time. (Shown here, an illustration of the quantum teleportation of 'Schrodinger's Cat' wave packets of light from a past physics study.)
(Image: © Image courtesy of Science/AAAS)

The strangeness of the world of the very small that allows a particle to be in two states at once may extend to larger scales, two new studies reveal. If the research proves true, that would bolster the validity of a thought experiment suggesting a cat can be both alive and dead at the same time.

The idea, called Schrödinger's Cat after the physicist,Erwin Schrödinger, who proposed it in 1935, goes like this: Put a cat in a box with a vial of poison gas. The vial opens when a tiny piece of radioactive metal emits an alpha particle (the nucleus of a helium atom) as it decays. Emitting an alpha particle is a quantum-mechanical process, which means that whether it happens in any given stretch of time is basically random.

In the two new studies, detailed in the July 21 issue of the journal Nature Physics, researchers used particles of light, or photons, to test the limits of such superposition. If there is no limit to how many particles or photons you can put into a quantum system, that means the cat really is both dead and alive at once, and the act of measuring its state makes the mathematical formulation that describes it (called a wave function) "collapse" into a definite state, alive or dead.

Another possibility, called the many worlds interpretation, would be even weirder: that all the possible states are real, and when the wave function collapses to one state, we're just experiencing one of many universes that exist simultaneously, in which every possible outcome happens. When the wave function collapses, we (and the cat) remember one history — a dead cat — but there's another universe where the cat is alive.

Both experiments, one conducted at Canada's University of Calgary and the other at the University of Geneva in Switzerland, involved enough photons to be seen with the naked eye, which shows that their quantum properties could be made macroscopic, researchers say.

In the two experiments, researchers measured the quantum states — a group of physical properties, including polarization and phase — of the light using polarization, or the angle through which a photon rotates. One can see polarization while wearing polarized sunglasses and tilting one's head while looking at the screen of a smart phone or computer. The screen will look black until the head is tilted at a certain angle.

The polarization measurements after restoration told the researchers that the quantum entanglement with other photons had happened. [How Quantum Entanglement Works (Infographic)]

The scientists are now trying to see how large a quantum system can get before it loses its quantum nature. "It's one of the few big unanswered questions in modern physics," said Alexander Lvovsky, a professor of physics and lead author of the University of Calgary paper.

The new experiments aren't the only ones to show superposition states.

In 2010 scientists at the University of California, Santa Barbara built a resonator — basically a tiny tuning fork — the size of the pixel on a computer screen, and put it into a superposed state, in which it was both oscillating and not oscillating at the same time. But that wasn't as extensive a system as those in the two recent papers.

"That experiment corresponds to one quanta," said Nicolas Gisin, a professor at the University of Geneva, who led the Swiss research team. "Imagine a nano-mechanical motor showing no oscillation and 500 states. That would be ours."

In the future, both groups will try to expand to bigger systems, where instead of translating a quantum state from a single photon to a large set of photons, they will try to translate the states of one large group to another. But that experiment will be a tough one, because in order to preserve quantum effects, groups of atoms or photons must be completely isolated from the surrounding environment, or the superposition states will be spoiled. "There are a lot more angles of attack," with more particles, Lvovsky said.