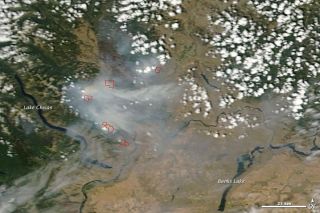 The sky is thick with smoke in central Washington, as the state's largest wildfire in recorded history leaves a charred trail of burned homes and blackened trees.

The Carlton Complex Fire began as four separate fires that were triggered by lightning on July 14. Hot and windy weather helped the fire spread, forcing an estimated 1,000 people to evacuate the area. As of today (July 24), the fire is spread over 390 square miles (1,010 square kilometers), or about one-third the size of Rhode Island, said Paul Gibbs, a spokesman for the fire crews battling the wildfire.

Video production company Chelan HD sent out a drone to record aerial footage of the burned landscape. The video features incredible views of the scorched foundations of a house and the smoldering tracks of a railroad. The drone even recorded a family of deer walking through the remains of a forest that the fire had burned to the ground. [See drone cam video of the Washington state wildfire]

Firefighters from across the country — even as far away as Florida — have contained 52 percent of the fire, up from 16 percent the day before, Gibbs told Live Science.

Nearly 3,000 people, including 59 fire crews, 212 engines, 13 bulldozers and five helicopters, are working to battle the blaze. "It's the number one [fire] priority in the nation," Gibbs said.

So far, only one death has been reported from the wildfire. A man died of a heart attack from hauling water and digging a fire line to protect his house, the Associated Press reported.

Yesterday (July 23), President Barack Obama announced that Washington could access aid from the Federal Emergency Management Agency for areas affected by wildfires, according to a statement released by the Department of Homeland Security.

The Carlton Complex Fire is not the only blaze in the state, or even in the Pacific Northwest. A total of 22 fires are burning in Washington and Oregon, reports the Northwest Interagency Coordination Center, which monitors wildfires and manages efforts to stop them.

High and dry temperatures are partially responsible for the number of blazes. It's possible that extreme dry or wet years due to climate change are affecting the western United States, said Jason Funk, senior climate scientist at the Union of Concerned Scientists, a nonpartisan and nonprofit group headquartered in Cambridge, Massachusetts, that informs policymakers about scientific research.

Since 1970, temperatures across the West Coast have increased by 1.9 degrees Fahrenheit (1 degree Celsius), Funk said. Higher temperatures are, in turn, partially linked to wildfire seasons that can last seven instead of five months. Fires that start later in the season usually encounter drier conditions, raising the likelihood that they will spread quickly and be more intense than blazes that occur earlier in the season, he added.

"Lots of scientific evidence points to the fact that wildfires have become bigger as [the] climate gets warmer overall," Funk said.

In the meantime, lightning this week sparked three new fires that the crews put out, Gibbs said. "There's probably going to be more in the next few days that become discovered," he said. "Sometimes they smolder and it can take a while to detect them."