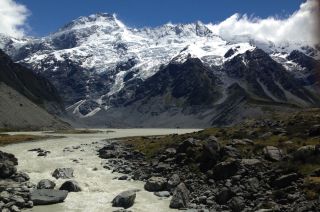 Researchers made the discovery while studying rocks along New Zealand's Alpine Fault, a fast-moving fault that slices across the South Island from northeast to southwest. The fault wiggles both side to side and up and down when it shifts during a big earthquake, which happens about every three centuries. The up-and-down motion has raised the spectacular Southern Alps, one of the world's fastest-growing mountain ranges.

Rocks on one side of the Alpine Fault were once buried more than 5 miles (8 kilometers) below the surface, but have since been carried upward by the fault's motion. The process took about a million years, said lead study author Catriona Menzies, a geologist at the University of Southampton in the United Kingdom. [Photos: The World's Tallest Mountains]

Menzies and her co-authors examined these exhumed rocks for clues about what kind of fluids are percolating below the Southern Alps. "These rocks are being uplifted so fast that they carry a lot of heat with them, and there's not enough time for them to cool by conduction," she told Live Science. "We think fluids play an important role in cooling the rocks."

To investigate the fluids, the researchers looked at tiny bubbles of water trapped in quartz. The bubbles formed at the same time the quartz crystallized, preserving a snapshot of the chemistry some 5 miles (8 km) below the Earth.

Distinctive textures in the quartz suggest it crystallized where the Earth's crust flows like warm plastic, in the ductile zone. The ductile zone is where rocks transition from fracturing and shattering in earthquakes to slowly deforming without breaking. Beneath the Southern Alps, this transition takes place at about 4 to 5 miles (6 to 8 km) below Earth's surface. However, the transition zone can be more than 30 miles (48 km) deep in other regions of the planet.

The chemical signature of water inside the bubbles matches that of rainwater in New Zealand, the researchers discovered. Their results will be published Aug. 1 in the journal Earth and Planetary Science Letters.

Until now, scientists hadn't found evidence that surface water can penetrate the ductile zone, Menzies said. "By definition, it doesn't have fractures," she said.

Menzies thinks that New Zealand's extremely high annual rainfall combines with the tortured, fractured rocks in the Southern Alps to provide a pathway for surface water to reach the ductile zone. "What's forcing this water down is the very, very high rainfall, and that a lot of rain falls on bare rock," she said. Some mountainous zones get more than 39 feet (12 meters) per year.

But there has to be another factor pushing the water past the ductile transition, she added. "That's something we need to investigate," Menzies said. For example, the depth of the brittle-ductile transition might shallow or deepen over time, trapping water in the ductile zone.

A new deep drilling project on the Alpine Fault is planned for later this year, and the researchers intend to retrieve fluid samples directly from the deep levels of the fault to further investigate the puzzle.