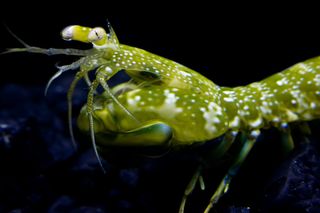 The bizarre visual system of the colorful mantis shrimp just got weirder: New research finds these animals use a natural sunscreen compound to see ultraviolet light.

Researchers knew that mantis shrimp, marine crustaceans sometimes known to crack aquarium glass with their powerful claws, had a very impressive visual system. The animals can see ultraviolet light, which is light with shorter wavelengths than humans can see. They can also see the orientation, or polarization, of light waves.

But the new study reveals that mantis shrimp have come up with some pretty neat tricks to pull off their impressive visual abilities. They recruit special amino acids that are usually used as a natural sunblock in animal skin to filter the light that reaches their eyes.

"The overall construction of the mantis shrimp's visual system is just so unbelievably ridiculous, so this is just another piece of that tapestry," said study researcher Michael Bok, a doctoral candidate at the University of Maryland, Baltimore County. [Photos: The Amazing Eyes of the Mantis Shrimp]

Mantis shrimp are complicated creatures. They are fierce hunters, killing prey with swift blows from their powerful claws, which can accelerate as fast as a .22-caliber bullet. Some species are monogamous, but all exhibit complex social behavior.

Mantis shrimp vision seems to be a crucial ingredient to the animals' success. Mantis shrimp have 12 photoreceptors, compared with three in humans, and they see more wavelengths of light than humans do.

Weirdly, though, mantis shrimp don't seem to discriminate between colors with as much sensitivity as humans; a study published in January in the journal Science found that their impressive 12-photoreceptor array allows them to process color in the eye instead of in the brain. (In contrast, humans have a fairly simple eye, but lots of visual processing set up in the brain that helps us to see thousands of shades.)

Mantis shrimp photoreceptors are organized in a band in the middle of the eye, with simpler cells around them, Bok told Live Science, and they seem to scan their environment constantly.

"You can envision it as them 'coloring in the world,'" Bok said.

It was these specialized cells that interested Bok and his colleagues. They knew that five or six of a mantis shrimp's photoreceptors were used for seeing ultraviolet light, and they wanted to identify the visual pigments that made up these receptors. An initial molecular analysis of the eye of the species Neogonodactylus oerstedii, however, turned up only two pigments.

That was a bit of a surprise, Bok said. The researchers figured the mantis shrimp eye must have filters to "sort" wavelengths before they hit the visual pigments, but the scientists didn't know where to look, at first. Because UV wavelengths are invisible to humans, there would be no way to see the UV filters with the naked eye.

Fortunately, the researchers discovered that as the filters in mantis shrimp eyes absorb UV light, they emit a tiny bit of fluorescence, visible to humans.

"We were able to see these very bright, beautiful fluorescing pigments in the eye," Bok said.

The filters are made of something called MAAs, or mycosporine-like amino acids. These amino acids are common in the skin of marine organisms, and are usually used to absorb cell-damaging UV light.

Mantis shrimp, however, have repurposed the MAAs to absorb certain UV wavelengths in the eye. Each different filter removes different portions of the light, meaning that certain wavelengths only hit certain areas of the eye.

"It pretty nicely narrows their sensitivity by removing certain components of the spectrum," Bok said. The filtering thus enables the mantis shrimp to detect multiple wavelengths with only two visual pigments.

"It's a very, very strange system, and it's very alien compared to ours," Bok said.

Bok, who is currently doing fieldwork on the Great Barrier Reef in Australia, said the next goal is to study how mantis shrimp use their unusual visual system. They might use visual information to communicate, to hunt or to avoid predators, he said.

"It's an interesting question," he said. "Why do they need this? What could it possibly be used for?"

Bok and his colleagues reported their findings today (July 3) in the journal Current Biology.