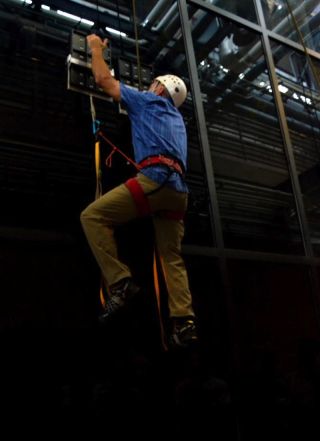 During testing, an operator climbed 25 feet (7.6 meters) vertically on a glass surface using no climbing equipment other than a pair of hand-held, gecko-inspired paddles. The climber wore, but did not require, the use of a safety belay.
(Image: © DARPA)

Scaling the side of a building without a harness or rope might sound like something only James Bond or Spider-Man can do, but the U.S. Department of Defense has developed a set of sticky handheld paddles that could help soldiers climb up walls.

The paddles are inspired by gecko feet, and during a climbing demonstration this month, they supported a 218-lb. (99 kilograms) man carrying a 50-lb. (23 kg) pack while he scaled a 25-foot-high (7.6 meters) glass wall.

The paddles were developed by the Defense Advanced Research Projects Agency's (DARPA) Z-Man program, a U.S. military program that creates new technologies designed to improve the safety and effectiveness of soldiers fighting in tight urban areas.

One of the essentials for urban soldiers is maneuverability. Gaining the higher ground is a tactical advantage in urban fighting, so soldiers often need to scale buildings and other objects. Toting ropes and ladders slows down a platoon, and the climber who takes the lead is often put in danger, DARPA officials said. [Biomimicry: 7 Clever Technologies Inspired by Nature]

In the animal kingdom, geckos have already inspired technology like medical adhesives that can seal wounds, and now researchers are studying these lizards' natural climbing ability.

"The gecko is one of the champion climbers in the animal kingdom, so it was natural for DARPA to look to it for inspiration in overcoming some of the maneuver challenges that U.S. forces face in urban environments," Matt Goodman, the program manager for Z-Man, said in a statement. "The challenge to our performer team was to understand the biology and physics in play when geckos climb, and then reverse-engineer those dynamics into an artificial system for use by humans."

Geckos are some of the most efficient climbers in nature because their feet are covered in hundreds of microscopic bristles. Each bristle is topped off with a patch of even smaller fibers called spatulae. The tiny size and triangular shape of the spatulae allow geckos to stick to surfaces, thanks to a special kind of physical bond called the van der Waals force.

Van der Waals kicks in when two surfaces come in close contact at several different points. This happens because the thousands of spatulae fibers on gecko feet maximize the points of contact between their feet and surfaces. This creates an electromagnetic attraction between the bristly gecko toes and the climbing surface. However, the force is a fairly weak interaction, so geckos are able to rapidly stick and unstick their feet, allowing them to scurry up and down walls.

The paddles developed by researchers for the Z-Man program don't stick and unstick quite as seamlessly as gecko feet, DARPA officials said. Moreover, there's an obvious weight disparity: The average gecko weighs 6.4 ounces (181 grams), whereas the average soldier weighs 165 pounds (75 kilograms). The thousands of fibers on geckos' toes increase the surface area across which they can distribute their weight, enabling the lizards to support between 15 and 30 lbs. per square inch (1 to 2 kilograms per square centimeter). The Z-Man designers had to create paddles with more adhesive force to support the weight of a human climber.

The paddles are not battlefield-ready yet, and tests of the new technology are still ongoing.