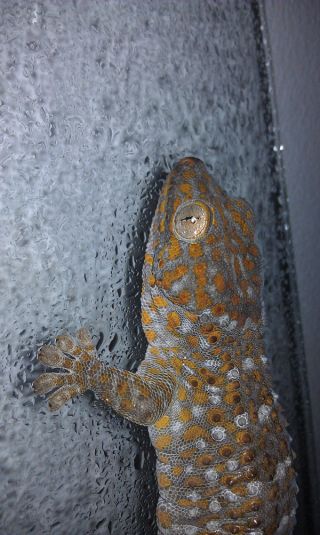 Geckos are famously adept at sticking to vertical surfaces. Their toes are packed with hundreds of microscopic hairs that get close enough to the nooks and crannies of a wall to bring the forces of attraction between atoms into play. With these specialized feet, a gecko's traction is so strong it can hold more than 100 times its weight and even scurry upside-down across a ceiling.

But despite their sticking superpowers, researchers observed that geckos slide down a vertical piece of wet glass after just a few steps. To test the limits of geckos' ability to cling, biology doctoral student Alyssa Stark and her team at the University of Akron in Ohio watched how the lizards' feet reacted under various conditions of moisture.

"We know they are in tropical environments that probably have a lot of rain, and it's not like the geckos fall out of the trees when it's wet," Stark said in a statement from the Journal of Experimental Biology, which published the study.

First the team put tiny harnesses on Tokay geckos and set each on a dry glass surface. It took about 20 newtons of force, equivalent to about 20 times the gecko's weight, to pry the lizards off the glass, according to the statement. But when the glass surface was covered with a mist of water, the geckos had trouble holding on, and their ability to attach varied with each step.

The geckos totally lost their ability to anchor themselves when they were put in a bath of water with a smooth glass bottom. What's more, they were unable to cling to a dry surface after their feet had been soaked in water for over an hour.

"The results of our experiment indicate that surface water and wetting of the adhesive toe pad significantly impacts the performance of the gecko adhesive system," Stark and her colleagues conclude in their paper.

The researchers say more work is needed to examine how long it takes geckos to recover their sticking power after getting their feet wet. And further investigation of the gecko sticking system will require observations of the reptiles in their natural environment, as geckos rarely encounter glass surfaces in their natural habitat and instead move across multiple types of surfaces.