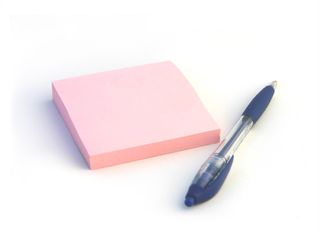 The adhesive on post-its acts like a solid, letting go when one slice of air slides between it and a surface.
(Image: © stock.xchng)

When looking at inventions like Post-its and duct tape, one might think we've got the science of stickiness down pat. But experts are still trying to understand the details of how stuck things get unstuck.

Recently physicists discovered there are two distinct ways for adhesives to release their grip, with no middle way and no smooth transition. A sticky substance can either act like a liquid or like a solid, it turns out.

"The goal of the study was really to try to understand the intermediate state between what happens when you have a sticky liquid and when you have a sticky solid," said researcher Costantino Creton, a physicist at the École Supérieure de Physique et Chimie Industrielles (ESPCI) in Paris. "We found there was no real continuous transition in behavior but a very sharp change from a very solid-like behavior to a viscous fluid behavior. We were surprised that there was no intermediate regime."

An example of a liquid adhesive would be honey, while a Post-it Note represents more of a solid adhesive. The difference is in the way the material deforms, or bends, to reach into the nooks and crannies of the surface it sticks to.

The researchers were interested in investigating adhesives that seemed like more in-between choices, such as duct-tape, which is ostensibly a solid, but can deform a lot like a liquid.

So Creton and colleagues Julia Nase and Anke Lindner, also at ESPCI, set about creating various adhesives that seemed to range along the spectrum and observed them coming unstuck under a microscope. But when they tested each material, it fell squarely on the side of either solid or liquid.

For two things to stick together their surfaces must come in contact as closely, and at as many points, as possible. Once their molecules become extremely close a force called the van der Waals force kicks in, which produces an electromagnetic pull between the molecules as their electrons start interacting and adjust their orbits so as not to repel. It's named for the Dutch scientist Johannes Diderik van der Waals.

Most surfaces do not stick naturally because on the microscopic level, they are not really smooth, so their molecules don't really come in contact with each other in many places. When you add an adhesive in between them, it molds itself to fit into all the little spaces between molecules, coming in close enough range for the van der Waals force to take over.

Things become unstuck when the surfaces are pulled apart and air intervenes between the adhesive and the surface, breaking the bonds between the molecules. But this process happens differently for liquids and solids.

"If you try to remove a solid you have a fairly thin slice of air that comes in between the solid and the surface, like a crack, that does not involve much deformation of the solid," Creton told LiveScience. "If you go on the liquid side, you have a very extensive deformation — the adhesive itself changes shape."

In the liquid case, the air enters in finger-like blobs throughout the adhesive, but with a sticky solid, the air penetrates through one long sliver at the edge between the adhesive and the surface.

"I think the main difference is that in the solid case the air is only at the interface and in the liquid it's really everywhere," Creton said.

"It really depends what surface you want, and how clean it is," Creton said.

The researchers detailed their findings in the Aug. 15 issue of the journal Physical Review Letters.