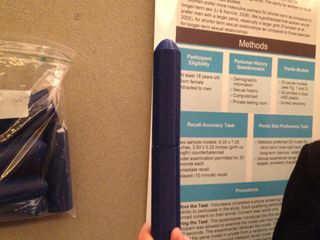 In a new study on penis preferences, women viewed and handled penises made on a 3D printer. The models were blue and came in 33 different sizes.
(Image: © Rachael Rettner for Live Science)

For one-night stands, size does matter, but it's not penis length that women are concerned about — it's girth, a new study suggests.

For one night stands, women selected penis models with slightly larger girth, on average, than those they selected for long-term relationships.

The vagina has many pressure-sensitive nerve endings that detect sensations of stretching, and these sensors may be finely tuned to detect variations in penis girth, the researchers said. A penis with larger girth may also bring the clitoris closer to the vagina during sex, which has been suggested to help with achieving orgasm.

On the other hand, longer penis length may lead to cervical pain, said study researcher Shannon Leung, an undergraduate in biology at the University of California, Los Angeles, who presented the findings last month at the meeting of the Association for Psychological Science in San Francisco.

Previous studies on whether penis size matters have had mixed results: A 2012 study of more than 300 women found that 60 percent said penis size made no difference to them, but that those who frequently experienced vaginal orgasms were more likely to prefer longer penises. And a study published last year found that whether women prefer larger penises depends on the proportions of the man's body, with larger penises being more important to them in bigger men.

However, many past studies have relied on images, or used terms such as "small," "medium" and "large" when gauging women's penis preferences, and these terms may have different meanings to different people, Leung said. The new study, on the other hand, is the first to use 3D printed models, which meant women could physically handle them, Leung said.

In a second part of the new study, women were given one of the penis models and allowed to examine it for 30 seconds. They were then asked to pick that same model from a bin of 33 models, either immediately or after completing a 10-minute survey (to allow time to pass).

After completing the 10-minute survey, women tended to overestimate the size of the penis they had previously examined, the study found.

This finding may be reassuring to men who are self-conscious about their penis size, the researchers said.

"For men who are considering surgery to increase their phallus sizes, maybe they do not have to after all, if women tend to overestimate" the size of a penis they've seen, Leung said.

The study, which was conducted at UCLA's Sexual Psychophysiology and Affective Neuroscience (SPAN) Laboratory, has not yet been published in a peer-reviewed journal.