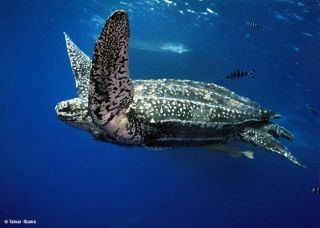 Shortly after snagging 2nd place in the Great Turtle Race, the leatherback turtle "Stephanie Coburtle" went missing and she has been "offline" for more than 100 days, it was announced today.

The female leatherback is named after comedian Stephen Colbert, who commented on "his turtle" on a video played at a Conservation International event, saying "I also want to thank my turtle Stephanie Coburtle for giving her all in the Great Turtle Race. Stay safe Steph."

She may still be safe, but now nobody knows. The Great Turtle Race began in April when 11 leatherback turtles set off from their nesting grounds in Playa Grande, Costa Rica, to the Galapagos Islands. Each turtle was fitted with a GPS transmitter as part of a project to monitor leatherbacks as they migrate to and from feeding grounds.

Currently, seven of the 11 turtles—Genevieve, Sundae, Turtleocity, Freedom, Purple Lightning, Billie and Saphira—are well on their way to feeding grounds off Peru and Chile.

Four leatherbacks, including Stephanie Colburtle and Drexelina, have stopped transmitting GPS signals and scientists can only speculate as to what happened to them, said project member Scott Eckert of Duke University's Marine Lab.

"After I've been hearing from [a turtle] every day, if I don't hear from it for two to three weeks I begin to think it's probably done," Eckert told LiveScience. "We don't know why. Bottom line, anything can go wrong."

The transmitter batteries could have run out of juice or the transmitters might have accidentally fallen off or been knocked off by aggressive males.

Losing tags is a particular concern for leatherbacks. Unlike other sea turtles equipped with hard shells, leatherbacks have a slick skin coating and tags don't easily stick to the skin. Eckert describes the skin as similar to the sleek suits worn by Olympic swimmers.

Other possible reasons for the missing turtles: the leatherbacks died of old age, though none of the contestants were particularly old; or they were caught by commercial fishermen, which would be illegal.

Considered the world's largest reptiles, male leatherbacks can weigh nearly 2,000 pounds (900 kilograms). Apparently, Colbert's turtle was a plus-size even in the leatherback world.