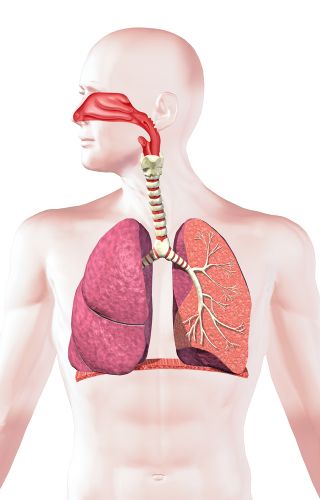 The primary organs of the respiratory system are lungs, which function to take in oxygen and expel carbon dioxide as we breathe.
(Image: © Leonello Calvetti | Shutterstock)

A test of patients' breath could reveal whether they have lung cancer and how advanced it is, or whether they suffer from chronic, noncancerous lung conditions, a new study shows.

The researchers developed a device that can "smell" lung cancer when patients blow into a balloon. Cancer cells produce specific compounds that enter the blood stream and cause changes in a patient's blood chemistry and breath, the researchers say.

The new device, made of gold nanoparticles and dubbed NaNose, is an extremely sensitive odor detector that can sniff out the compounds present in the breath of people who have lung cancer, according to the study.

The researchers tested the device on 80 lung cancer patients and 31 patients who had chronic obstructive pulmonary disease (COPD), which is a variety of lung conditions that can cause shortness of breath and coughing.

The results showed that the device correctly distinguished lung cancer patients from COPD patients about 85 percent of the time.

The test also distinguished between lung cancer patients who were at an early stage of the disease and those who had advanced lung cancer about 79 percent of the time, the study showed. The findings were presented at the annual meeting of the American Society for Clinical Oncology in Chicago, which took place May 30-June 3. [Biomimicry: 7 Clever Technologies Inspired by Nature]

"This could totally revolutionize lung cancer screening and diagnosis. The perspective here is the development of a nontraumatic, easy, cheap approach to early detection and differentiation of lung cancer," said study researcher Dr. Fred Hirsch, a professor of medical oncology at the University of Colorado's School of Medicine.

Catching lung cancer early before the disease spreads can make a substantial difference in how long patients live after they have been diagnosed with this cancer, which claims nearly 160,000 lives in the United States each year.

Recent lung cancer screening guidelines by the U.S. Preventive Services Task Force recommend yearly CT scans of the chest for people who are at high risk of developing lung cancer. Studies have suggested that taking this approach may reduce lung cancer deaths by 20 percent.

However, yearly CT scan screening also has a high rate of false positives. About a quarter of healthy people who get screened get a result that suggests they have cancer, and only find out later, after more testing, that they don't, according to the National Cancer Institute.

There's a need to develop sensitive tests that can better distinguish whether abnormalities in lung tissue are cancerous or not, Hirsch said. Such tests can also be used to double-check the findings of CT scans, before more invasive testing is done.

The clinical trial for the device is ongoing and more research is needed, but the device could be on the market in the coming years, the researchers said. Future generations of the device could potentially help doctors quickly detect patients' lung cancer types and track their response to treatments, Hirsch said.