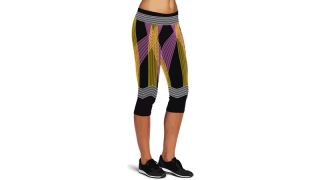 A new kind of exercise clothing, currently called Skinesiology, could help you burn calories during everyday activities, such as walking or climbing stairs.
(Image: © Image courtesy of Skinesiology)

There may be hope for people with desk jobs: A new kind of clothing aims to tone muscles and burn calories, and you don't even have to break a sweat.

The clothing, currently called "Skinesiology," was invented by a team of medical students who'd had trouble finding time to exercise. The clothes work by resisting muscles, and are designed to burn calories during everyday activities.

The team entered an entrepreneurship competition at New York University's Stern School of Business and won $75,000 to develop a prototype of the clothing. [7 Common Exercise Errors — And How to Fix Them]

"We're not creating [the clothing] as a replacement for exercise," said Franklin Yao, a first-year medical student at NYU School of Medicine, who is leading the startup project. Rather, it's a way to supplement exercise, Yao told Live Science.

More than one-third of U.S. adults are obese, according to the Centers for Disease Control and Prevention. The fact that many people either can't or don't want to exercise is a contributing factor, researchers say.

It's a challenge to change people's habits, Rizzo said. "What if we could increase our caloric expenditure during daily activities by making clothing more resistant?" Rizzo asked.

The NYU medical students came up with the concept of workout clothes that make muscles work harder by resisting their motion and, as a result, burn extra calories.

The team realized that, living in Manhattan, they did so much walking to the subway, walking to the office or going up stairs. "If we got just a little bit more caloric burn — not an overwhelming amount — we might get more exercise," said team member Ryan Grattan, a first-year medical student.

The team built a prototype pair of pants that restricts hip movement. They tested it by having someone walk on a treadmill, and then measured the walker's heart rate to calculate how many calories were burned. In preliminary tests, people burned 20 percent more calories when wearing the pants than when doing the same amount of exercise when wearing normal clothing, the team said. [See video about how Skinesiology works]

The fitness apparel contains resistive bands that produce a feeling similar to walking through water, the team said.

Normally, the bands have a tendency to ride up when a person moves. If there is no mechanism to prevent it, "the clothes are going to scrunch up, and you'll look like you're wearing a diaper," said team member Josh Phelps, another first-year medical student.

Instead, they designed the bands to work like a Chinese finger trap, the team said. When you pull on the bands, they tighten, the same way tendons in the body do, Rizzo told Live Science.

The clothing could also be adjustable, depending on the number of bands used and where they're placed. The tighter the bands, the greater the resistance. But the clothing is also meant to be comfortable. "It won't be like a straight jacket," said team member Jenny Chen, also a first-year medical student.

The product will initially be targeted at women, and the team is working with fashion designers to optimize the look of the apparel. "We have to make this very fashion-forward," Chen told Live Science.

The team also envisions the clothing being used by elderly people or diabetics, who may have trouble doing traditional exercise.

The students have filed a provisional patent for their Skinesiology clothing, and plan to have a market-ready prototype completed by the end of the summer.

Editor's Note: This article was updated at 3:26 p.m. ET June 4, to correct the spelling of Jenny Chen's name.