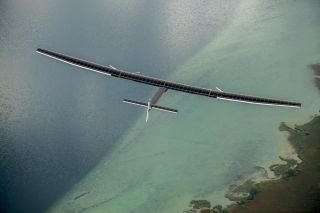 The Solar Impulse 2 flies near the Payerne Air Base in Switzerland on its maiden voyage on June 2, 2014.
(Image: © Solar Impulse)

The plane launched soon after sunrise from the Payerne Air Base in northern Switzerland, trailed by a helicopter that recorded its flight. Pilot Markus Scherdel flew the experimental, single-seater craft for 2 hours and 17 minutes, before landing it successfully. The ultimate goal is to fly the solar plane around the world, said Solar Impulse CEO André Borschberg

"This inaugural flight is an important stage — a step closer toward the round-the-world flight," Borschberg said in a statement. "It is also a huge emotional step for the entire team and all our partners who have worked on the aircraft. Si2 incorporates a vast amount of new technology to render it more efficient, reliable and in particular better adapted to long-haul flights. It is the first aircraft which will have almost unlimited endurance." [Video: Watch the Maiden Voyage of the Solar Impulse 2]

Last year, Borschberg and his co-founder, Bertrand Piccard, piloted their first experimental solar plane, the Solar Impulse, from California to New York in five legs. Solar Impulse landed at John F. Kennedy International Airport on July 6, 2013, ending the flight several hours before schedule because of an 8-foot-long (2.5 meters) tear in the fabric on the underside of the plane's left wing. Borschberg and Piccard told Live Science at the time that the tear did not affect the plane's control, and that the solar components and batteries of the plane performed without a problem.

The Solar Impulse plane was powered entirely by sunlight, and had onboard batteries that charge during the day to keep the plane aloft at night.

"It's already amazing to have had so little problems," Piccard told Live Science. "Normally, on a prototype, you make a flight and you have to change a lot of things."

According to the company, the round-the-world flight attempt will take place in the Northern Hemisphere and include stopovers in four or five cities along the way. The city of the launch has yet to be determined.